Architect Omar Calderón Santiago is a man with a vision. As a Design Principal at the award-winning global firm Perkins Eastman, he designs highly sustainable school buildings that seek to empower student success. We enjoyed learning about what inspires him to create net-positive learning environments. 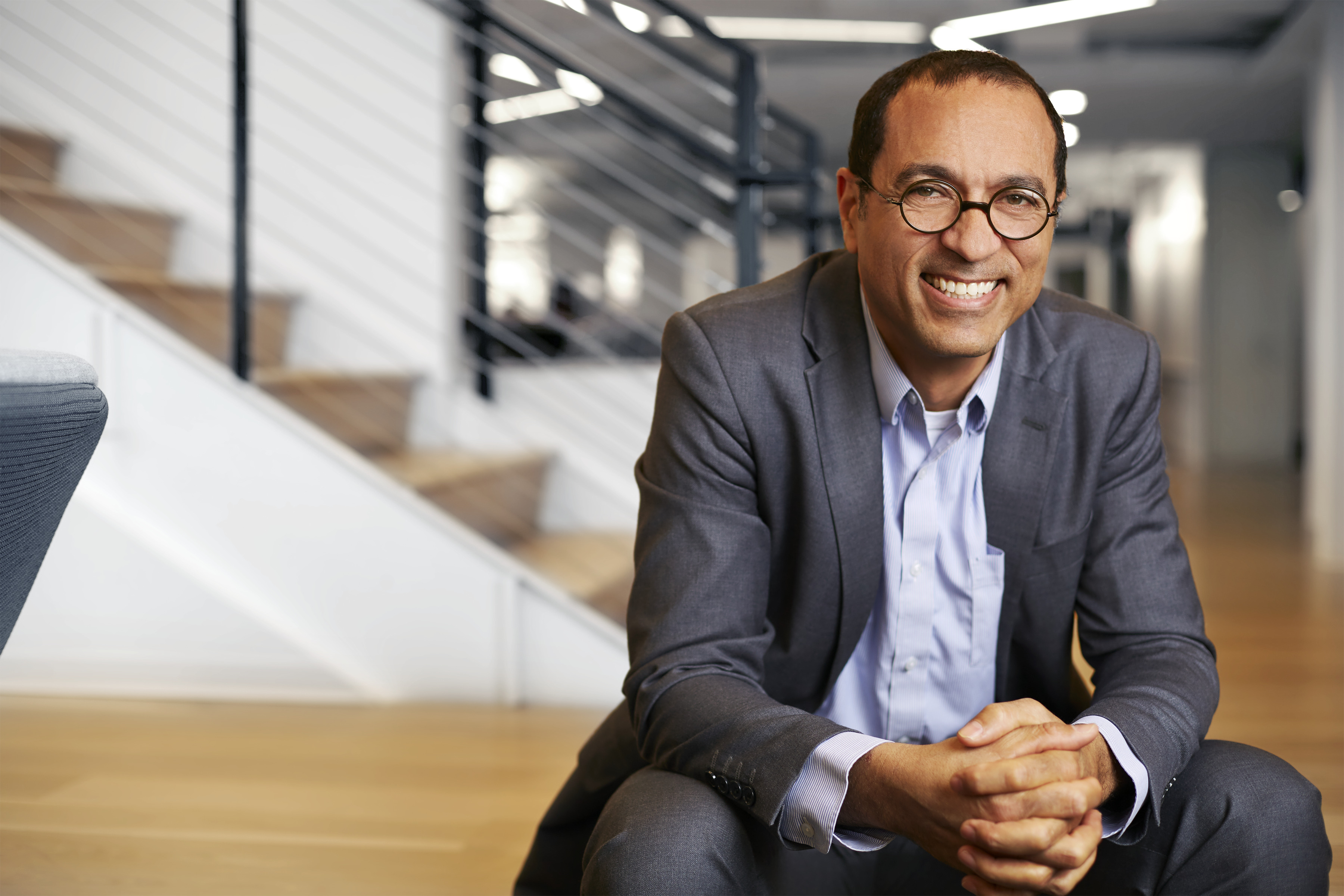 How did you get started in the industry?

I was trained as an architect and obtained two degrees in architecture, the first from Iowa State University and then from Columbia University for grad school. I joined Perkins Eastman soon after I graduated.

Tell us about your role at Perkins Eastman.

My area of expertise is learning environments. I lead the design practice of K12 schools alongside Sean O'Donnell, who leads Perkins Eastman’s K12 practice firmwide, and Mary Rankin, who is the managing director of our Perkins Eastman DC practice. 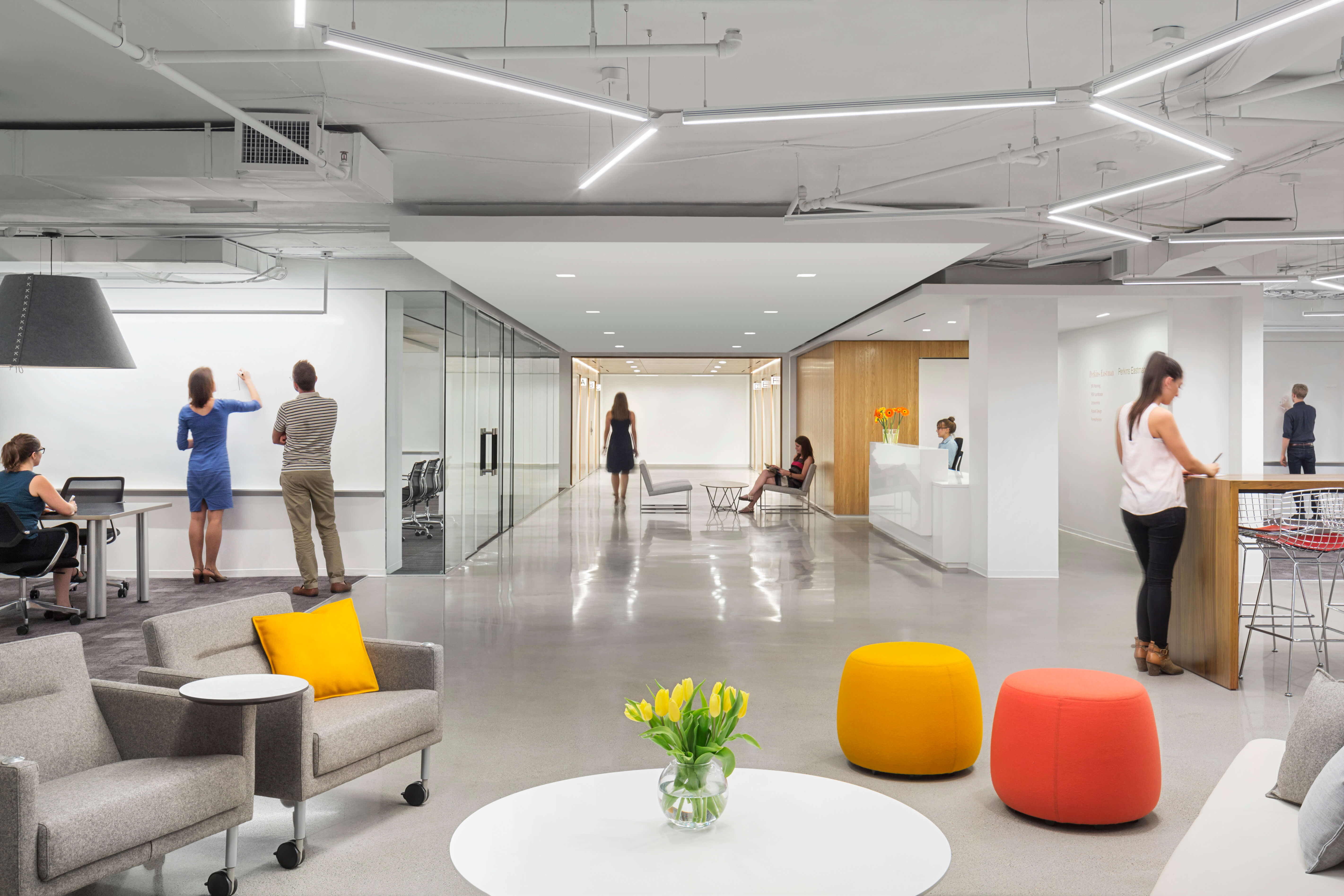 I work out of the Washington, DC, studio on regional and international projects. I first became involved in K12 through the international side of the practice. The first few schools I designed were overseas, ranging from Abidjan in Côte d’Ivoire to Shanghai, China. I'm currently working on the American School in Lima, Peru, and the American School in Guatemala City, Guatemala. While K12 is my expertise, I also work on higher education, senior living, multi-family residential, and mixed-use projects.

Perkins Eastman is a large global family. The company is similar to an archipelago of islands in that it has many locations, but together they form one firm, allowing us to leverage global expertise and resources.

It’s a privilege to be a part of a practice that allows me to see the world and engage with communities that are different from my own.

The K12 side of the practice was founded on the premise that we as architects have the capacity and responsibility to have a positive impact on people's lives, and in particular, the lives of students. There is no reason why every school shouldn’t be the healthiest, safest, and most energy-conserving space possible. At the root of it, every parent in the communities I talk to wants the same thing, which is success for our students. 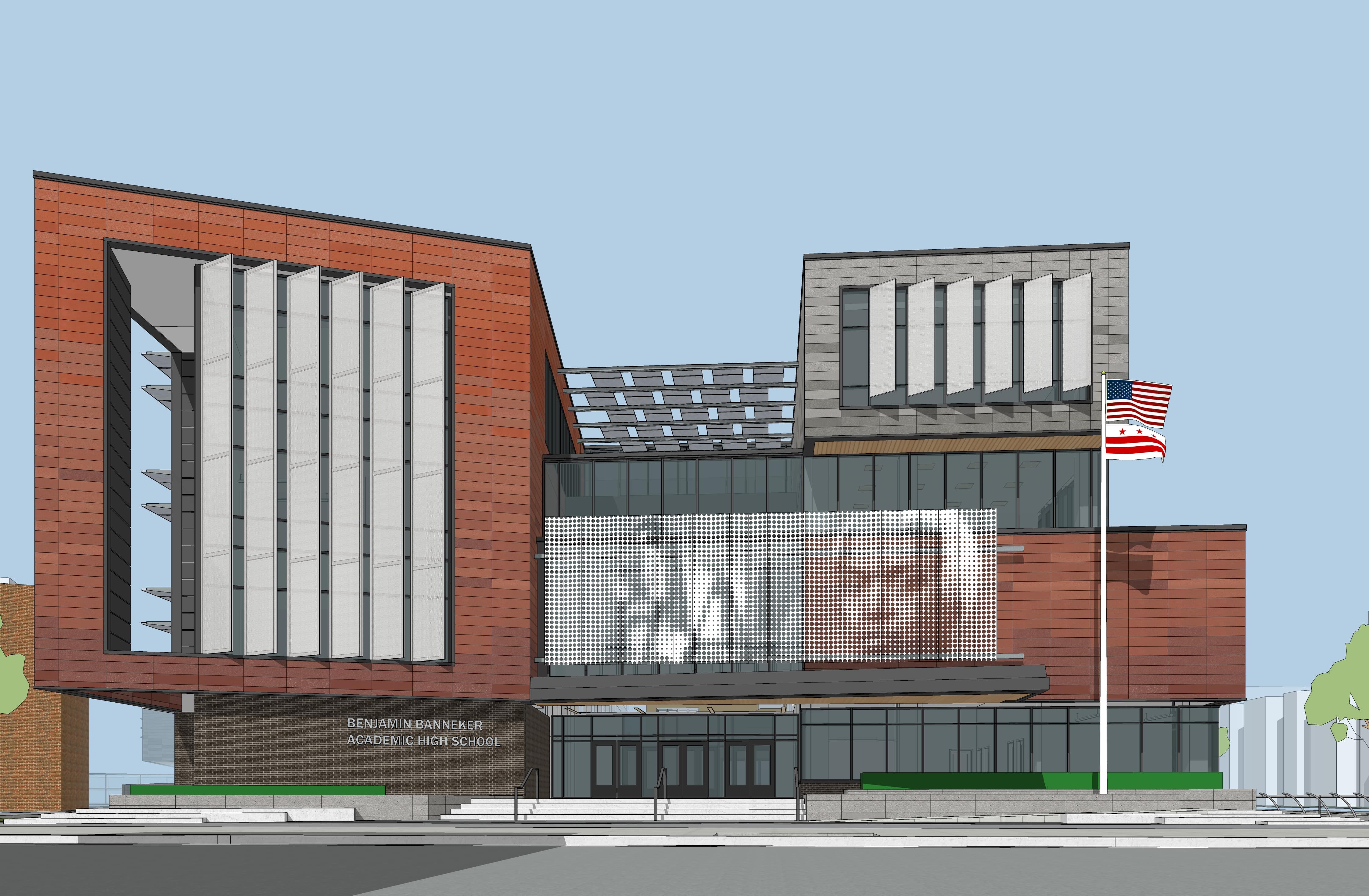 Perkins Eastman has been building our K12 practice for the last 10-15 years precisely to design these high-performance learning environments. We started using our own language to describe our schools, coining the term net-positive education, a spin-off of net-zero energy. Net-positive hints at our aspiration to create carbon-neutral, net-zero energy schools that are healthy to be in, but beyond that, our true aim is high-performing students. The success of students—that’s the end game. Perkins Eastman uses SketchUp and Sefaira to achieve the net-zero design.

How does technology support this aspiration and your role as a design leader on these projects?

As a design leader, it's my task to lead the vision and support design teams to develop that vision of the school, and I use SketchUp almost exclusively for that. I’ve been using SketchUp for 15 years from the @Last days, and I've evolved as an architect using it. I’ve expanded my drawing capabilities and representation to better communicate ideas. 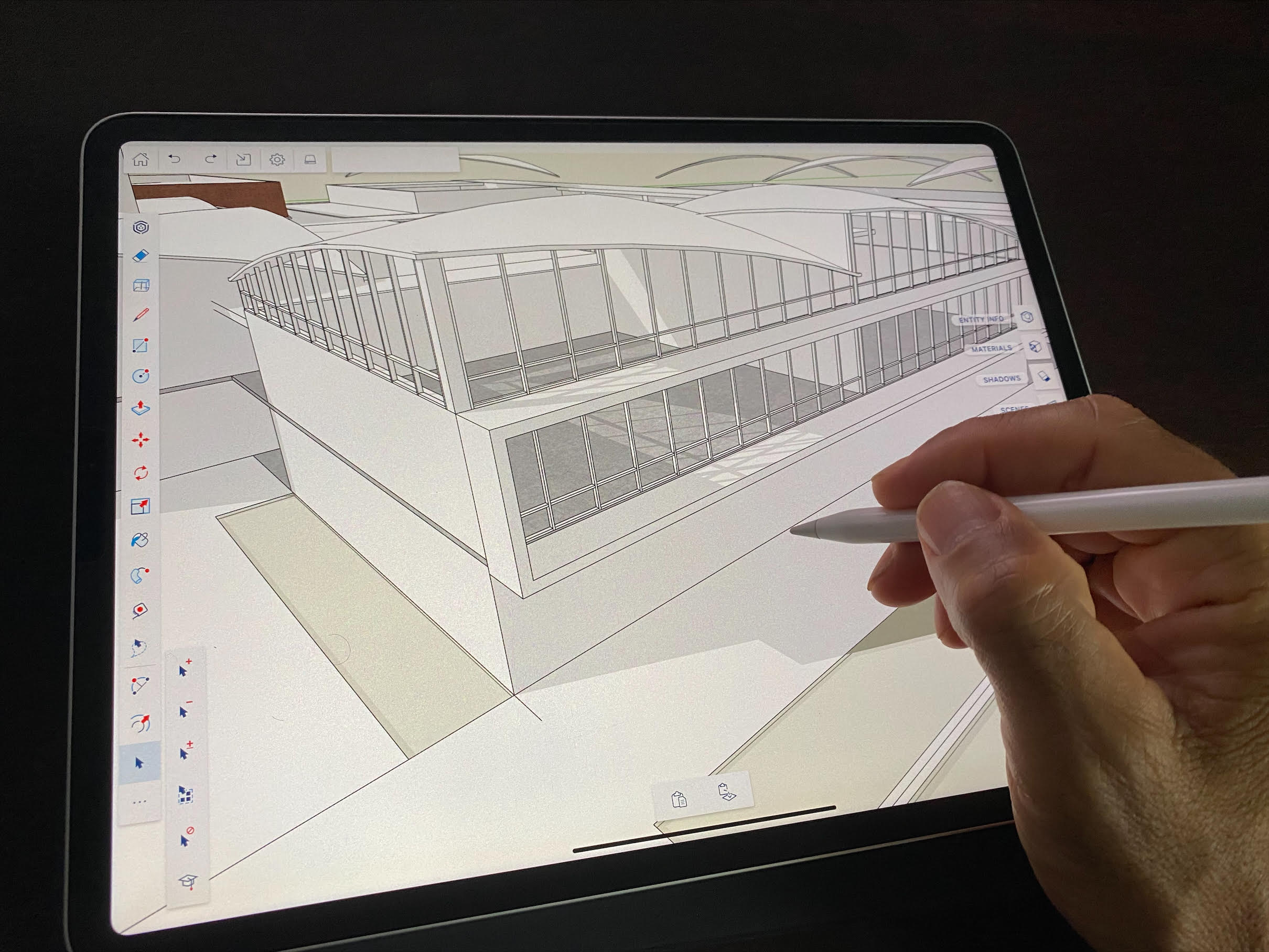 I provided feedback to SketchUp for its iPad Beta. I’m thrilled that some of my suggestions made their way into the recently-launched SketchUp for iPad. It has been so transformative for my day-to-day as a design lead that I haven’t needed to use SketchUp on my desktop in more than three months. If there is a positive to the pandemic, it’s that it allowed us to free ourselves to think about other ways of working that are no less effective than past ways of working.

Your job requires you to lead the vision for the design and your team. Why do you choose to use SketchUp to do this?

The most obtuse reason has to do with how I was educated as an architect. When I was studying at school, there was a heavy reliance on hand drawing because that's what was done at the time. Pencil on vellum were the most elemental tools that we used and we drew big. We would do these exercises where we drew furniture and details at a scale of 1:1. Reflecting on that, what you're able to absorb when you draw things in that way is better than any technical manual you can get.

By the time I arrived at Columbia University for my graduate degree, computers had appeared in the studio. I was an architect that would just draw by hand, but all of a sudden now I'm using a computer to draw everything. I took it upon myself to figure out how that would impact me as an architect, and I discovered SketchUp after I graduated and started working at Perkins Eastman.

‘SketchUp represented a very low barrier of entry, in terms of being able to draw something in 3D and immediately be able to rotate it and look at it from a variety of points of view and angles. It was as intuitive as drawing with my hand. Using SketchUp represented the best of both worlds, doing digital work that can be reproduced and represented but with the intuition of almost drawing by hand.’

With the release of SketchUp for iPad and being able to use the Apple Pencil, everything is just coming together—now I'm able to use SketchUp and use an actual pencil. This connection between the brain and your hand—there’s nothing like it. Now I'm able to do SketchUp, brain to hand to screen. It's been liberating!

Tell us about your design workflow.

I typically start from the macro scale and move to the micro scale. One of the first things that I do is use SketchUp’s geolocation tools to get a sense of the location and scale at least in the plan view. This understanding of context is crucial because a majority of the schools we design are in urban sites. 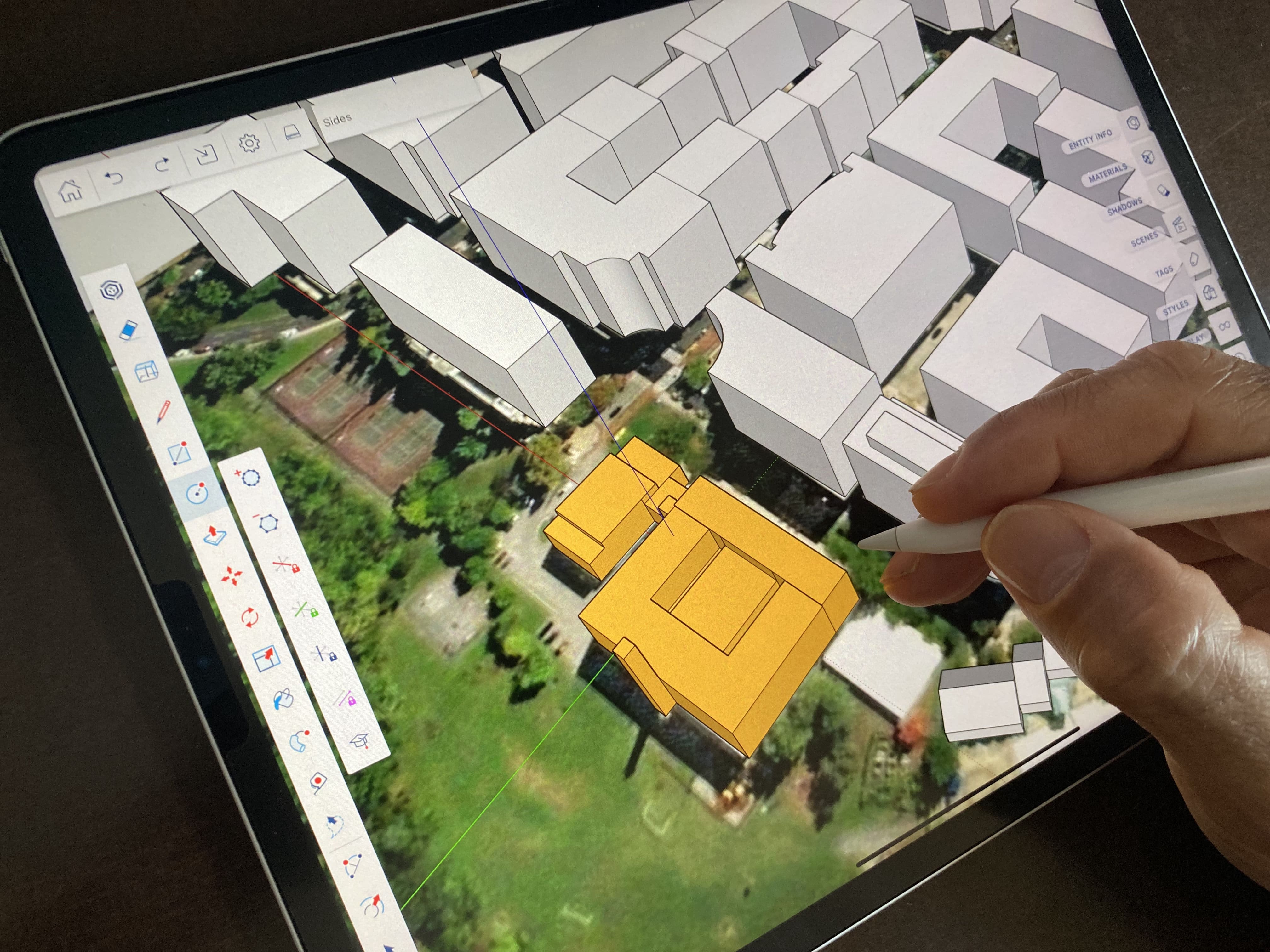 From the context model, we kick off exploratory massing exercises. At this stage, we’re not quite sure what the school needs to be yet. My colleagues, Sean and Mary, and I simultaneously work on defining and articulating a vision for what the school wants to be. At the same time, we're talking to the community, as often the best ideas come from the students themselves. It's vital that we engage the community early on in the process.

The SketchUp models are presented to the community and help us articulate ideas and explain concepts. I start from the macro with massing and then I dive deeper into the details. As we learn more about the design, I start adding more detail like floors and programming pieces to articulate the form of the building. As the building then starts to take shape, we shift to the envelope of the building.

What SketchUp extensions do you use?

I live and survive by using many SketchUp extensions — I have a few tools that I've been using almost exclusively. I discovered an extension called Profile Builder, which allows you to extrude profiles and wall assemblies along a path. This makes it easy to build whole walls very quickly with just one stroke of a line. That has been critical for speeding up my workflow.

When it comes to the envelope, I use a number of other tools and other extensions, most of them free. I use something called Extrusion Tools, by developer TIG. I use several Fredo6 extensions, which include tools that are phenomenal for shaping and scaling things in a smart way. As a rule of thumb, any script that allows me to modify geometry in SketchUp in a smart and intuitive way is something I'm interested in. 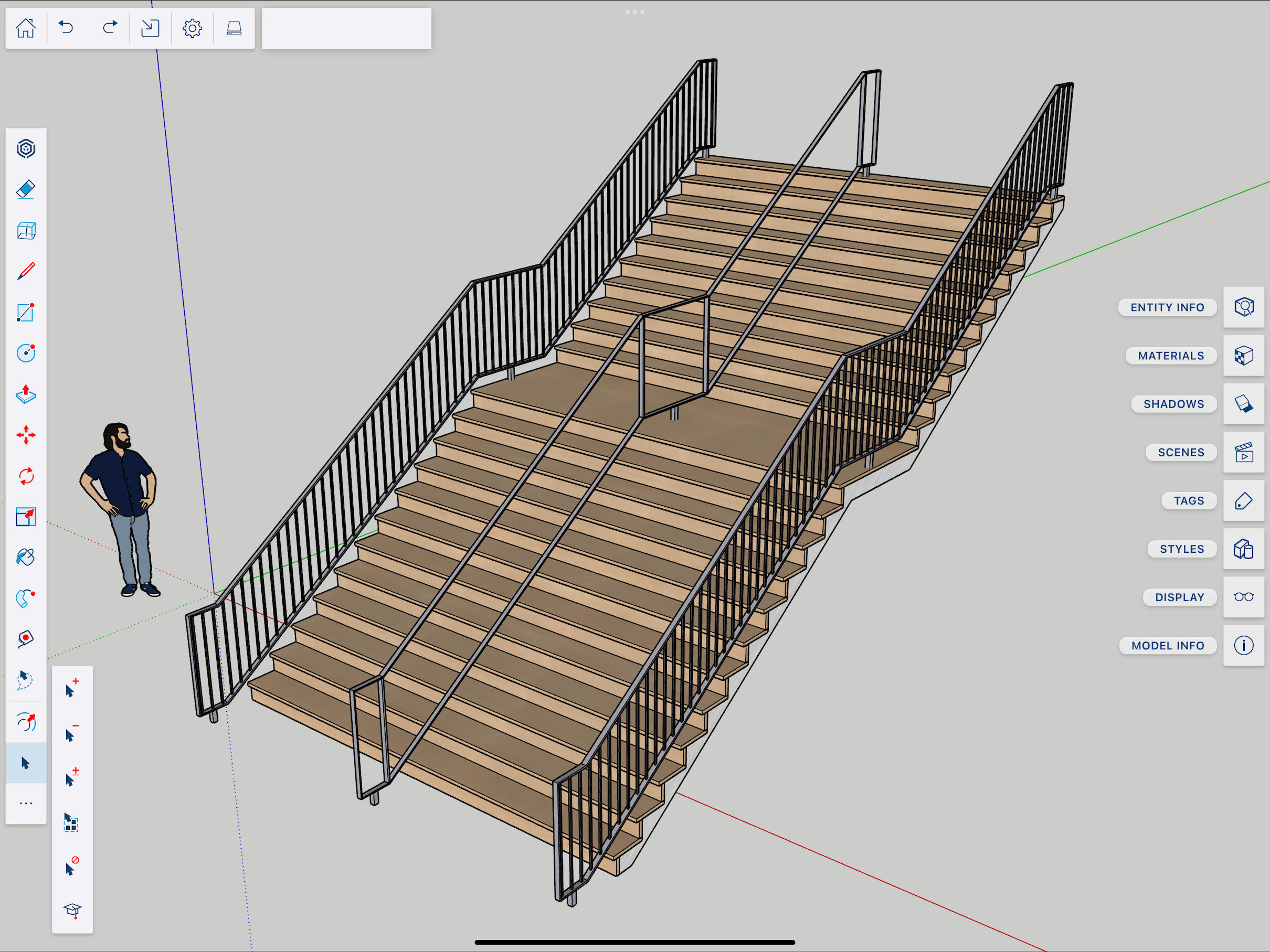 Over time, SketchUp has moved closer and closer to parametric modeling. I’m now exploring Live Components for making complex components like stairs. I don't have to build stairs anymore, I can just grab a stair live component and then configure it to suit what I need. This has been critical for achieving greater efficiency in my workflow.

How do you bring your flair and personality into the work that you create?

Early on in my career, I used SketchUp’s Style Builder to create my own line styles. I drew a series of lines using pencil on vellum and scanned them into Style Builder. All of a sudden, I could create in SketchUp, but use a representative style that had my own hand on it. This stood out so much that colleagues at the office started using it and to this day, they call it the “Omar Style.” 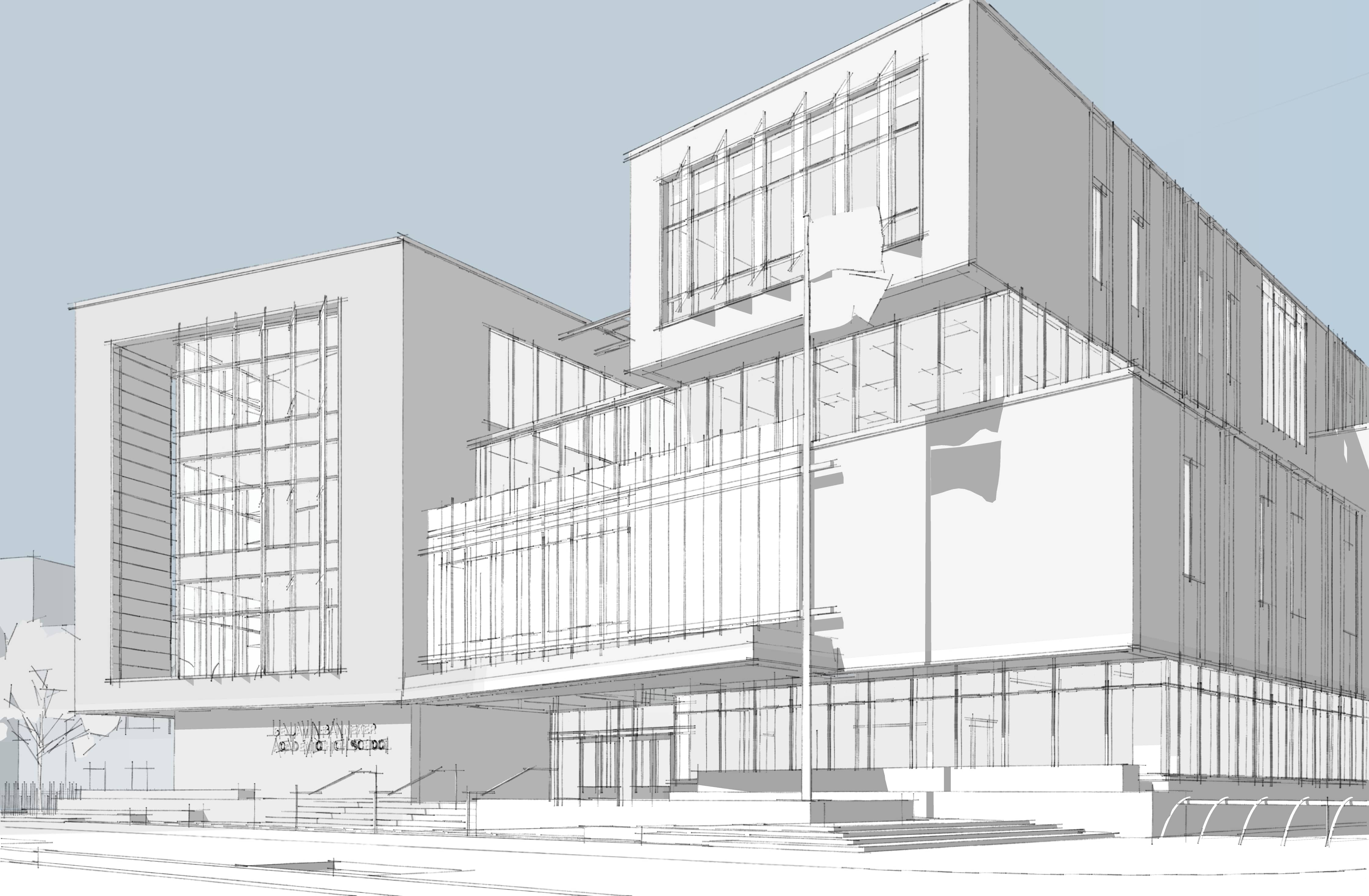 For renderings, I use Lumion because of the speed with which it delivers a nice-looking visual with little effort. It’s liberating that we don't have to get expensive hardware to provide quality visuals.

If you aren’t a current SketchUp subscriber, try it out using our free 30-day trial.

Perkins Eastman is a global design firm dedicated to the human experience. It is a network of more than 1,100 thinkers, dreamers, and doers spread across 18 practice areas and 24 interdisciplinary studios worldwide. They strive to leave a lasting positive impact on people’s lives and the world by engaging in an integrated design process and always keeping people at the heart of what they do.