Holygon is a Swedish company that specializes in creating historically-accurate digital models for visual and 3D printing applications. At 3D Basecamp 2018, Founders Anders Lyhagen and Felix Heuman presented how to accurately model urban spaces for 3D printing. We asked them to share their top workflow tips with the whole SketchUp community.

Whether we’re modelling a Greek temple or producing Sweden’s largest color, 3D-printed city model, we approach each project in the same way: we start with careful planning. This workflow has proven robust for modelling classical structures, but much of it applies to other projects, too.

Our initial drafts are hand drawn until we finalize a design. We follow traditional principles and use traditional elements: pedestals, columns, entablature… but the design is always our own. For full control of the expression, we build every part from scratch.

We spare no effort searching for the highest quality measured drawings of a certain order. Searching may take weeks. Our ionic order, for example, used high-resolution scans from the original editions of Stuart & Revett’s 1764-66 survey “Antiquities in Ionia” found in the online library of Heidelberg.

Take a good look. Again. And again. You think you know the face of your mother? Try drawing it from memory. Things are not what they seem. Learning how to see is a creative act. It requires effort.

Starting on paper and modeling in SketchUp, Holygon builds every element in their model from scratch.

Within SketchUp, there are always multiple solutions to every challenge. Choosing appropriate methods is an intuitive and path-dependent process. To do this, you need to know your tools. With experience, you can fairly quickly sort out the trivial parts and focus on the challenges. We often discuss how to achieve a certain shape before even turning on the computer.

At Holygon, we regularly use programming as a modelling tool. Our extension Flowify is one such example. Flowify solved our need to wrap 3D solids on top of doubly curved surfaces, such as scales on a fish.

When drawing curves, we use as many segments as we dare. Every curve or face is then grouped, moved to a separate layer, and hidden for later use. We generally draw as much as possible in 2D before moving to 3D. Drawing in 2D may take longer than finishing 3D volumes, but we use shortcuts obsessively.

An X-ray view of Holygon’s Fort Doris exposes the inner courtyard. Its delicate dentils contrast with the blocky mutules of the façade.

To bring designs into 3D, we extract copies of the 2D outlines and make them three-dimensional by push-pulling, sweeping, lofting, flowifying, and so on. We use extensions liberally. Usually, we design in three or more concurrent SketchUp instances to keep files light and nimble while running SketchUp’s internal checks. Modelling in all solids requires discipline. The solid modeling principle is a fierce teacher, but it is also a rewarding one.

It helps both performance and model management. The component principle applies at multiple abstraction levels: a symmetric building can be represented as eight-eighths, each a component. All 3D modelling applications use components of some sort, but SketchUp’s component management remains best in class.

After we've finished the most difficult parts, individually, we import a scanned image of our gridded, final composition drawing. We now begin combining parts. We may reuse parts from previous projects, retouching them as we go. Watching a structure unfold is often the most fascinating part of the process.

Once satisfied, parts that should be functionally integrated, such as the column shaft, are combined into solid unions. We scale down the result to its intended size. 3D shape is paramount. This is why we typically use few materials or none at all. If we use materials, they are plain colors. We divide printable models into chunks, turn them into solids and send everything to print. 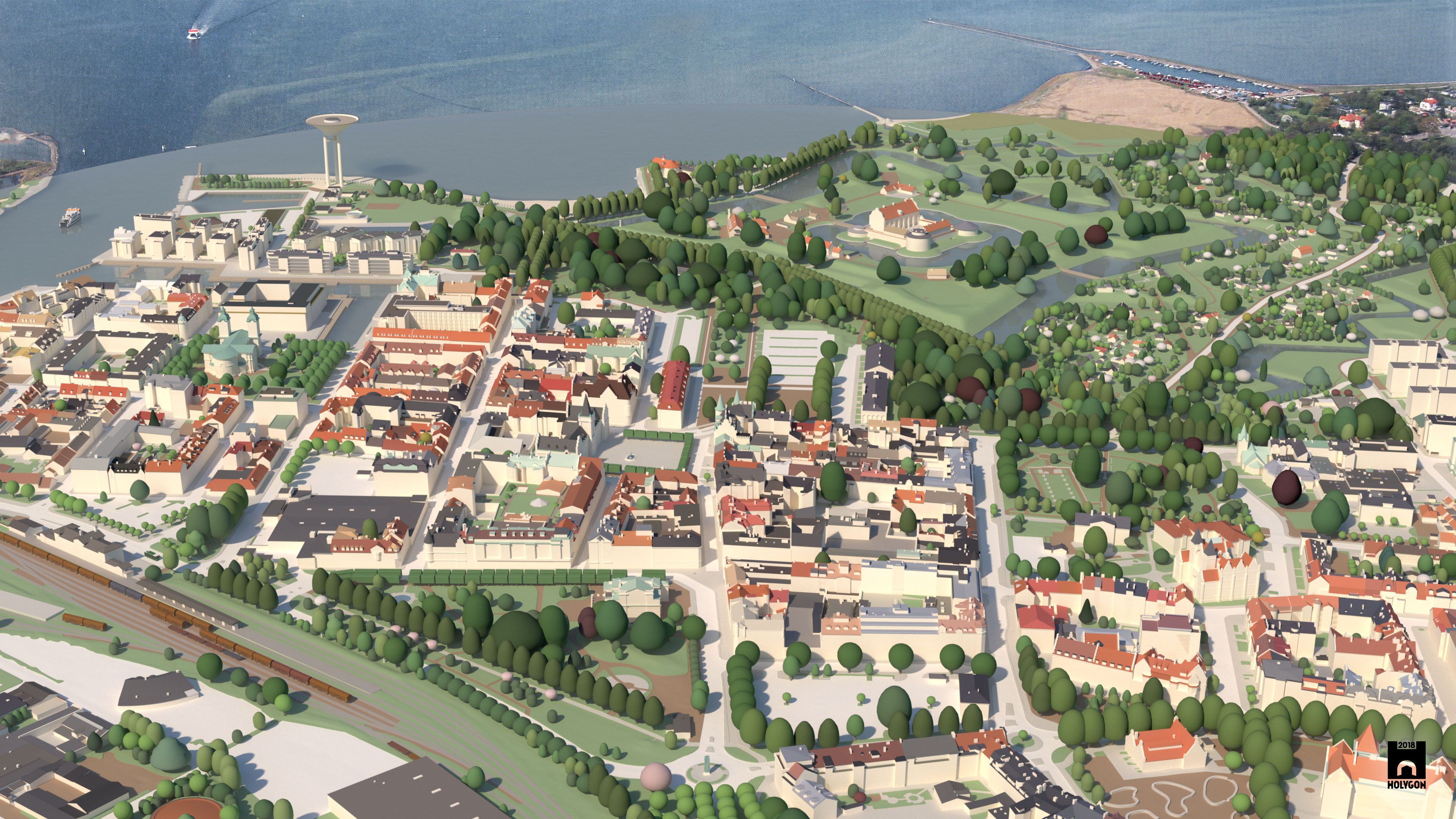 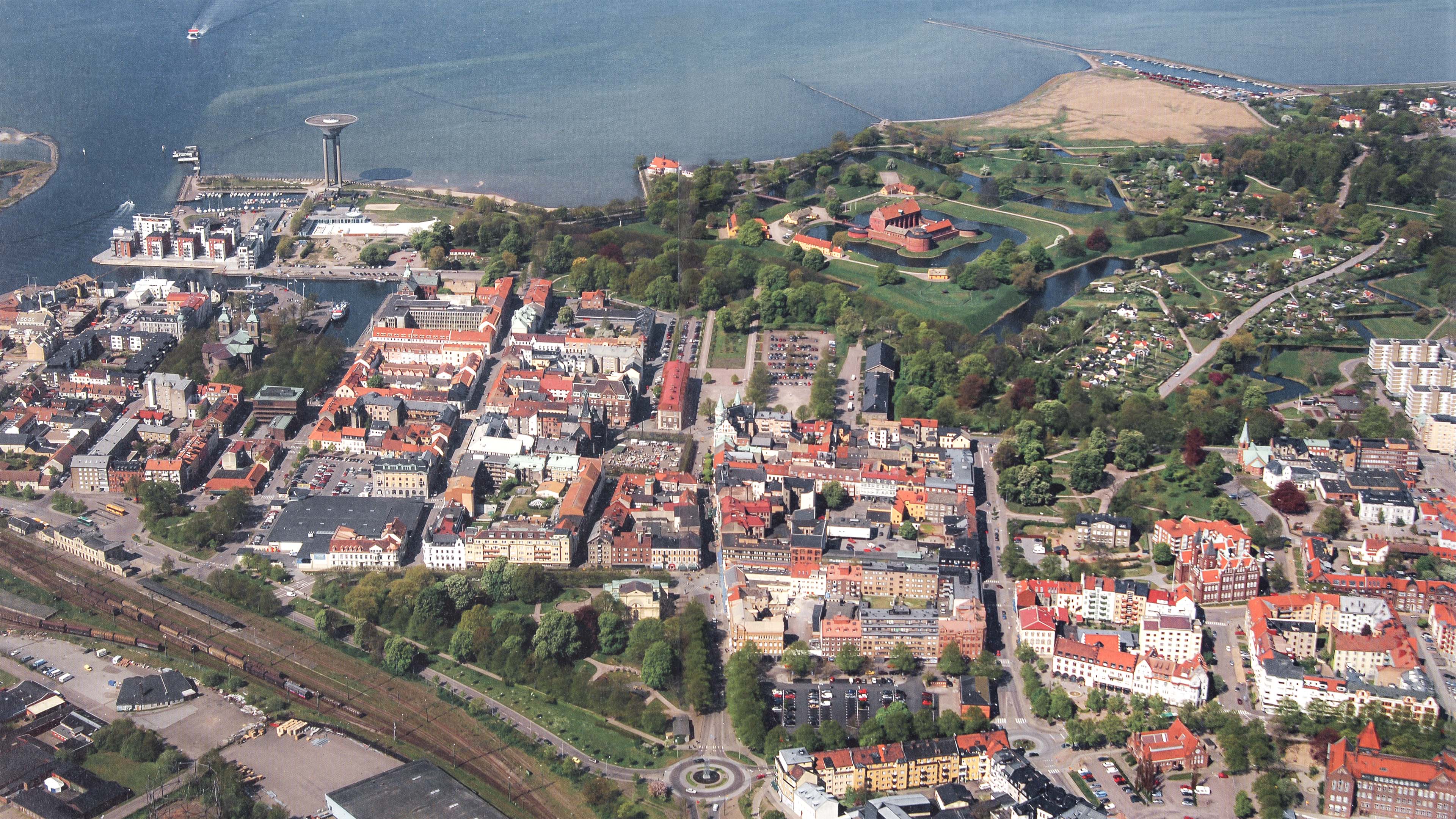 Holygon divides their SketchUp model into chunks before taking it to the 3D printer.

Nothing validates all your hard work more than seeing your sketch come to life as an accurate, 3D-printed model.

Felix and Anders inspect their 3D-printed model of the Swedish city of Landskrona during the unveiling ceremony.

For an even deeper dive into Holygon’s workflow, watch their 3D Basecamp 2018 presentation.