For Pozas Design Group, giving life to the tallest building in Latin America (LATAM) was not the original intent. With clever, late-stage modifications, the firm added the needed height to make vertical history. Now complete, the record-breaking Obispado tower in Monterrey, Mexico, is the first of two landmark structures designed by the high-end architecture firm. Driven by continuous creativity, the architects share their design workflow and the technology used to create and adapt the 3D model. 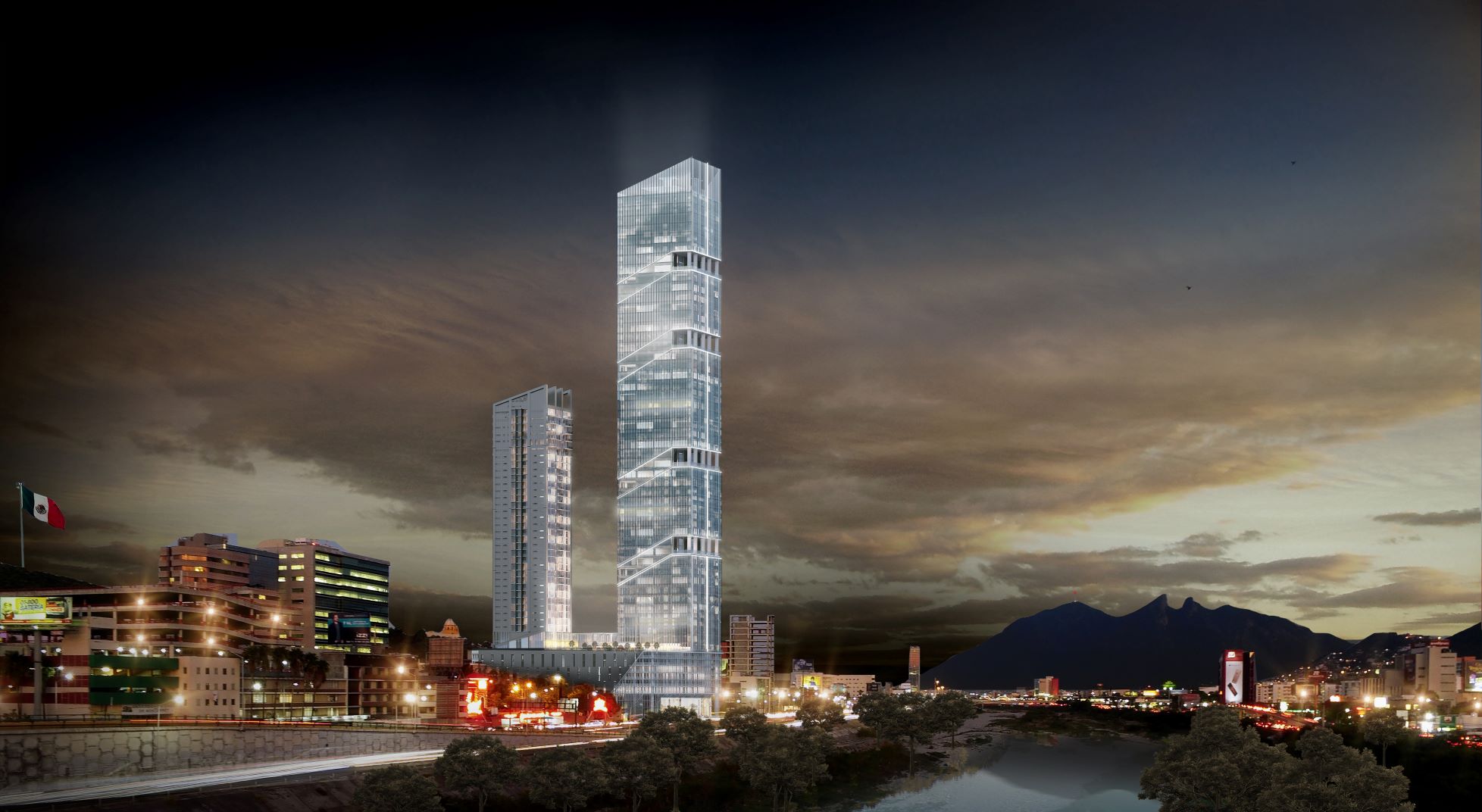 The vision for a landmark project

Based in the sprawling industrial city of Monterrey, Pozas Design Group specializes in residential and commercial design. The group combined a Mexican design style and values of service and human connection to create the Obispado and Rise Towers — the most prominent structures they had yet attempted. The hope for these buildings is that they will further expand recognition of Mexican architecture in the world.

The Obispado tower was intended to be a landmark from day one. The client wanted a multi-functional building that serves the needs of its users and adds a harmonious note to the city’s skyline and nearby mountains. Posaz’s multidisciplinary team facilitated conversations with stakeholders and construction managers from the start of the project, incorporating the client’s vision and constructible reality into the design. The process was smooth, proceeding from concept to construction drawings in just twelve months.

After the project was well underway, someone asked, “Will this be the tallest building in LATAM?”

The team realized the building only needed to be 10 meters taller to make history for Monterrey and Mexico. At first glance, the additions appeared simple, and the changes may have been simpler if the project was not already in motion. It was challenging to modify the mature design and planned facade while retaining the original intent. Four stories shorter than the final design, the original concept already faced wind and structural challenges due to its significant height.

3D model of the two towers, built in SketchUp.

A fluid and adaptive workflow

Pozas Design Group places their success in delivering the Obispado building — from the original concept that won their client’s trust to achieving its monumental height — in their daring creativity and the architecture design software that allowed them to express it.

The project was conceived when a long-time client invited Pozas Design Group to develop a preliminary conceptual design for two towers in downtown Monterrey. The designers spent a week developing early models within SketchUp to win their client’s confidence. In the end, they were awarded the project by listening empathetically to their client’s needs and by their ability to iterate in 3D rapidly. The final proposal presented was approved with minor changes.

After gaining the client’s trust, the team continued developing the conceptual model in SketchUp. They used CAD tools and specific structural software to simulate wind and analyze the internal beams and facade loads. The detailed model was then exported to generate 2D construction drawings. All subsequent changes were modeled in SketchUp, including the late-stage modifications to fashion the tallest building in LATAM. 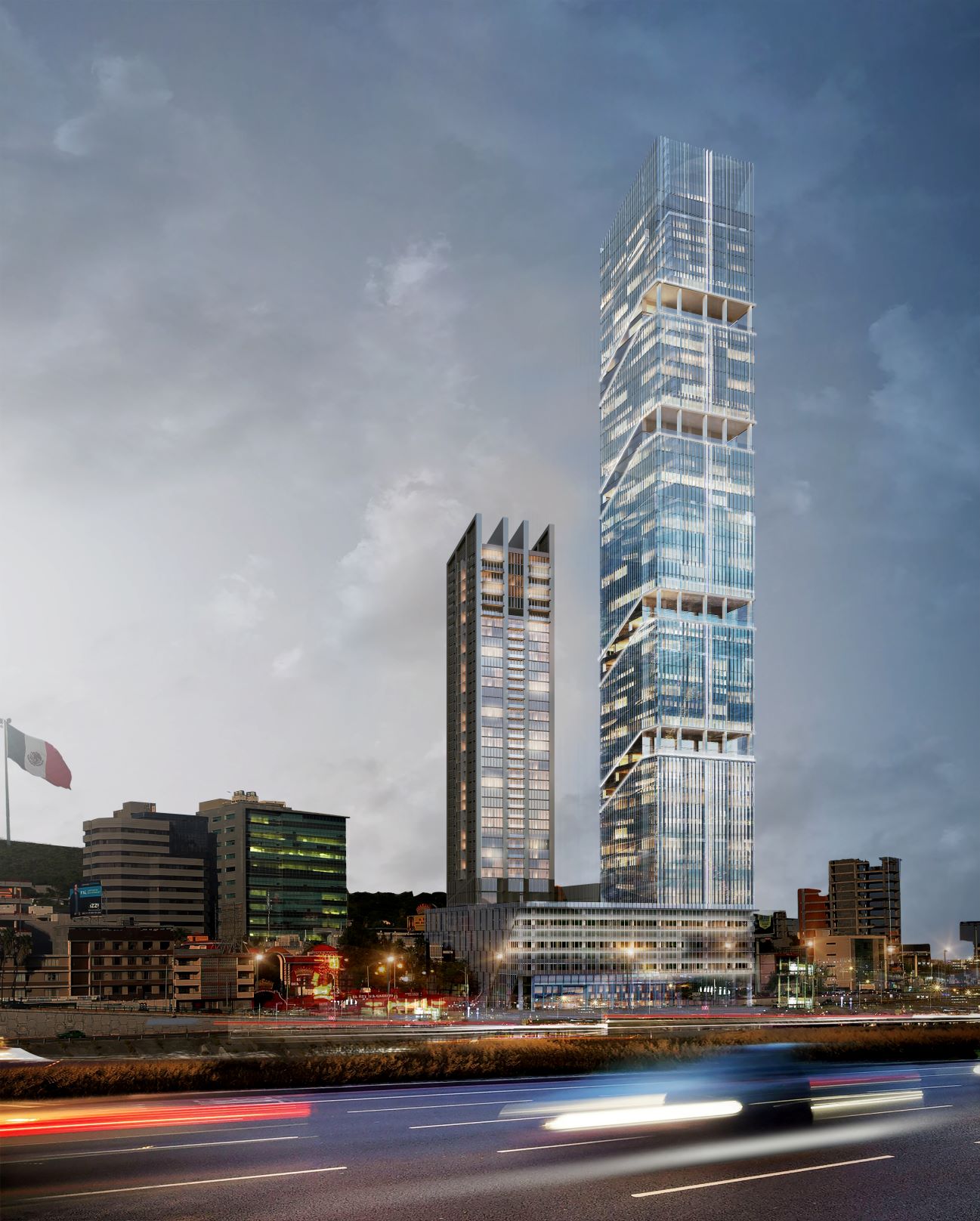 Rendering of the Obispado tower.

Modeling software can help or hinder the creative process. Some software lend themselves to more rigid forms (think squares and rectangles), and it becomes more complicated to establish the shape you need. Pozas Design Group uses SketchUp because it allows them to go from thinking to creating quickly without having to waste time fiddling around with a setting; one of SketchUp’s modeling features includes Live Components, a generative tool that uses mathematical equations that allow designers to imagine new possibilities. This fluidity includes the ability to transfer as-is data as point clouds from the site using SketchUp’s Scan Essentials tool to the model and back, allowing architects to understand what real-world problems they may face.

3D model of the two towers, built in SketchUp.

For Pozas Design Group, anything that blocks the creative process is immediately set aside. They relentlessly search for the best way to build projects, picking 3D modeling software that lets their imagination run wild.

At completion, the Obispado building in Monterrey stands at 304 meters or 997 feet, with 71 levels, 176 hotel rooms, 42 offices, and a business center, achieving LEED Gold certification.

With 92 floors, Pozas Design Group’s second tower will be the new tallest building in LATAM.  Poised next to the Obispado tower and slated for completion in 2022, Rise will have more than 250 apartments, 50,000 to 60,000 square meters of offices, and 180 hotel rooms.

Driven by constant innovation, the team will use lessons learned in building the Obispado tower when forming Rise. They now look differently at how to evolve SketchUp models between conception and development. For Rise, Pozas Design Group will create components (not groups) for the mullions of the facade so changes can be made easier in later iterations. The model will also be separated into blocks that each architect will be responsible for (facade, interior, rendering, etc.). With improved and connected design workflows, it’s anticipated that the planning of Rise will go even smoother than the first tower. After all, Pozas Design Group is designing the tallest building in LATAM (again) — from the beginning.

Ready to use SketchUp? Become a subscriber, or try it out using a free 30-day trial. 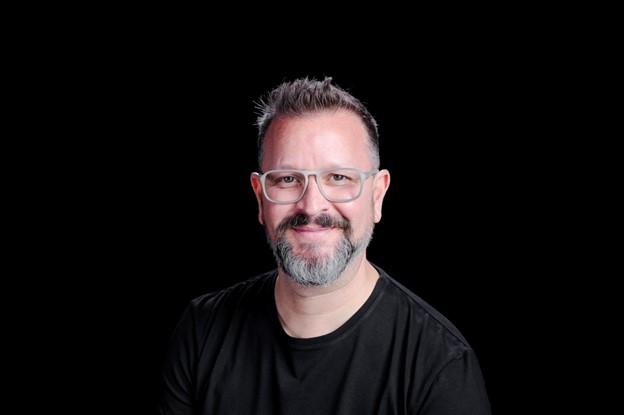 Pozas Design Group is a multidisciplinary architecture and design firm based in Monterrey, Mexico, founded in 2000 by architect Bernardo Pozas. The group consists of Bernardo Pozas Diseño Residencial, a specialist in high-level residential design; Pozas Arquitectos, an architectural design firm focused on the development of vertical and mixed-use projects; PCG Design, an office specializing in interior and furniture design; and The New Home Project, a developer of residential real estate projects.

The group lives to create timeless architecture and design: with identity, character, and personality. Constant innovation nourishes their creativity and offers a unique vision that reflects client values and achieves a harmonious connection between the user and the space. Technology innovation is at the heart of their creativity and service to clients. Pozas Design Group invests in 3D technologies to build better projects and express design ideas. Follow @pozas_arquitectos on Instagram.