Westport, Ireland has been holding the Town of Tomorrow competition for a few years now. As the name implies, the competition is about designing a futuristic version of Westport town with Google SketchUp. For this year’s competition, we flew out to Ireland to train students in basic SketchUp modeling techniques.

After the training, students spent two and a half months developing their visions of what Westport should look like in the future. We then selected winners based on how innovative, creative, and practical the design was. Many of the students incorporated themes of green technology, renewable energy, and sustainability into their projects. 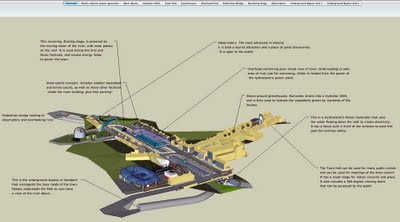 The winning design from the Electric Spoon Parade team!

This year’s winning design came from the Electric Spoon Parade team and was based predominately on the use of converting the town’s canals to hydroelectric power generators. There were also other water catchment systems set up around the town to collect rain water for greenhouse use and filtered for consumption at a newly designed sports complex. Other important attributes include an underground bypass for automobile traffic and a pedestrian bridge.

We held a celebration to announce the winners and awarded everyone a variety of fun Google gear, notably the sweet shades the participants are sporting in the photo above. The Town Council of Westport also generously provided gift cards to all the members of the winning teams.

Westport may be a small town in Ireland, but it has some big ideas on how to become the Town of Tomorrow!