Andy Walmsley (AndyWalmsley.com) is an Emmy award-winning set and production designer whose work has appeared in television, Broadway, Las Vegas, and beyond. Andy uses SketchUp Pro extensively in his design work, and, in this post, shares how he came to production design as a career and how 3D has changed his work. 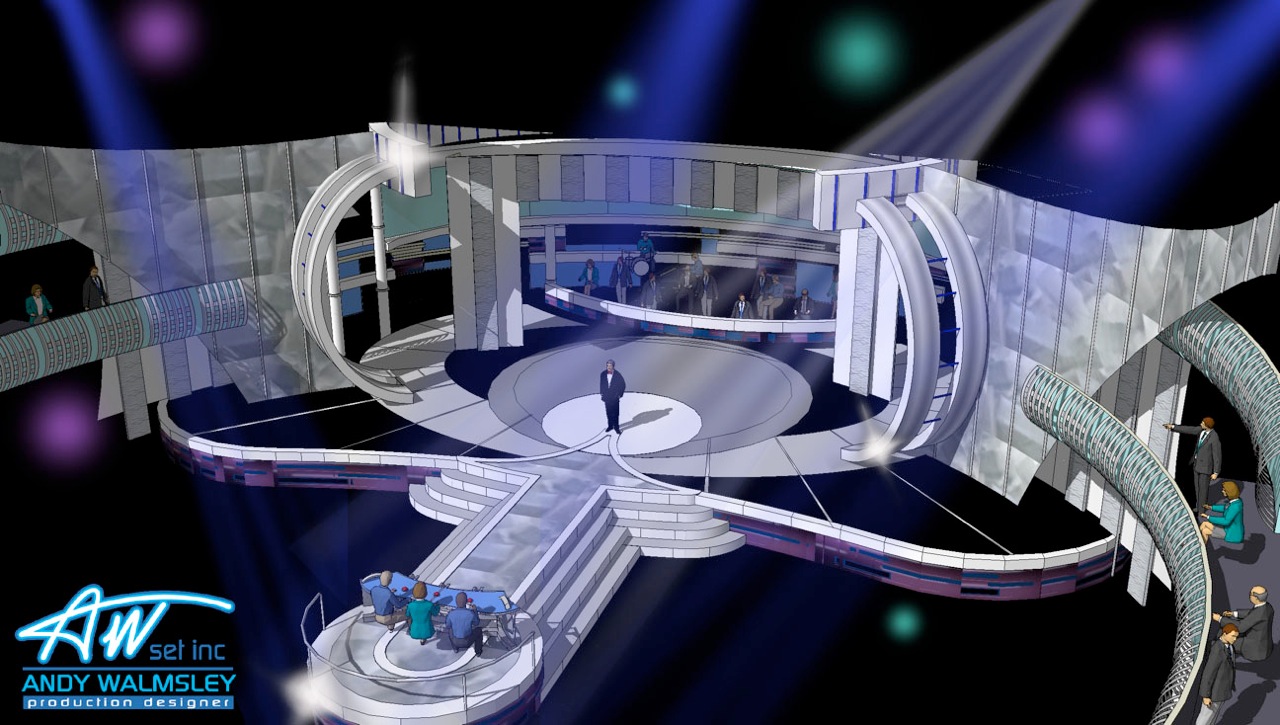 What kind of sets do you work on?

I’m very diverse, especially for someone in my field. I am essentially a set designer although there are many fancier names for my job: art director, production designer, scenic designer, scenographer. Most people in my line of work tend to specialize in one genre. For example, the guys who do Broadway theater set design rarely (if ever) work on TV sets. Television designers who do ‘drama’ don’t do entertainment shows (like award or game shows). And the designers who do opera and ballet don’t do musical theater. Movie designers just do movies. Rock n’ roll touring designers also specialize. I am very unique in that I design for major TV entertainment shows, Broadway musicals, Las Vegas spectaculars, museum projects, ice shows, cruise ship performances, theme parks, circuses, corporate events: essentially, I’ll design a set for any genre as long as it’s entertainment. 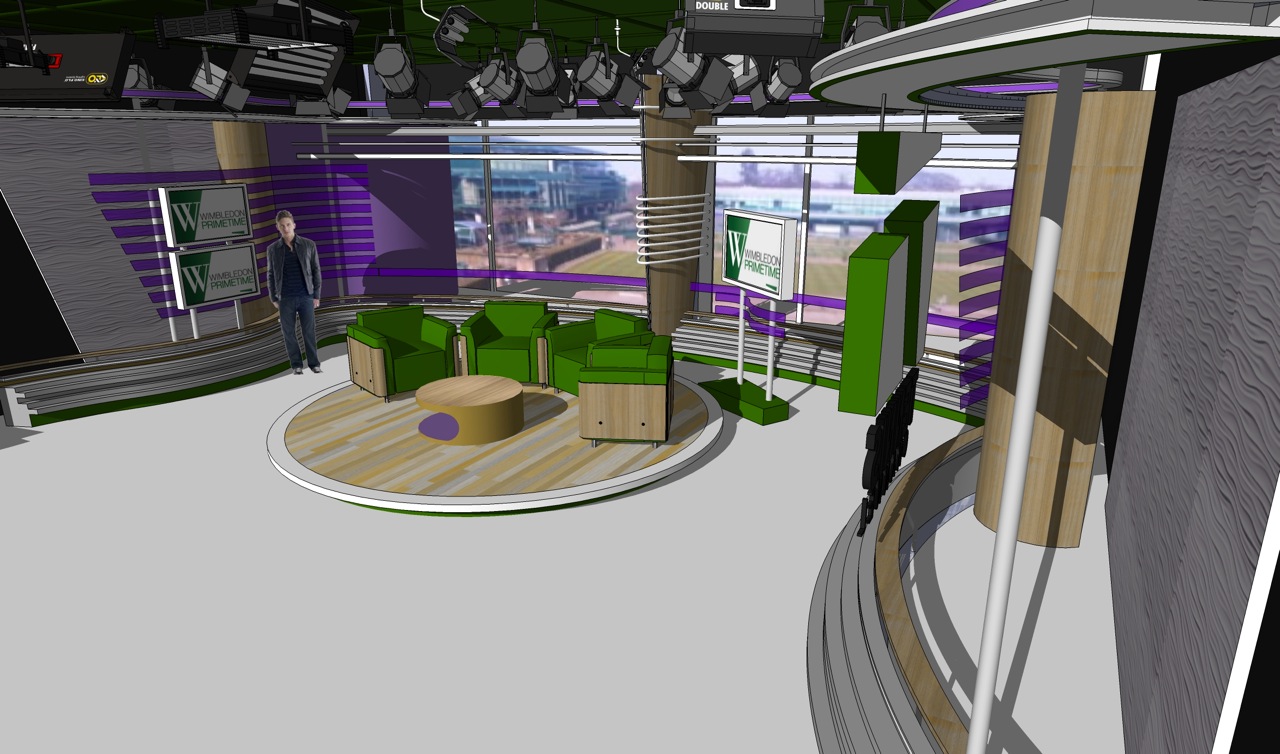 The production design for the Tennis Channel's Wimbledon Primetime

How did you get into set and production design as a career?

I come from a family of performers. My great grandfather was a very famous British comedian; my grandmother was a silent movie piano player; my grandfather a big band bass player; my dad was a famous comedian; and my mom a fire eater (yes, a fire eater). So I grew up backstage in Vaudeville theaters, TV studios and the circus. For a while I wanted to be a TV cameraman, so my mom bought me a little Lego TV camera crew and I built Lego TV sets and had my little plastic crew shoot my masterpieces. The models got more and more elaborate, and one day a family friend, magician Paul Daniels (the UK’s David Copperfield) saw my models and said, “You know, people actually do this for a living.“ I owe a lot to Paul and even more to Lego.

Have you worked on any projects that folks might have heard about?

Just a few. Most famously, I designed Who Wants to Be a Millionaire? (before I started using SketchUp). My original design for that show is the most duplicated scenic design in history, as the set has been built to every identical detail in 108 countries around the world. That set was also used in the Oscar-winning film Slumdog Millionaire. I designed for American Idol which is often considered the most successful show in the history of American television. I was nominated for three Emmys for that show and won the Emmy for ‘Outstanding Art Direction.’ I’ve worked on America’s Got Talent, So You Think You Can Dance, and a bunch of other well-known TV projects. 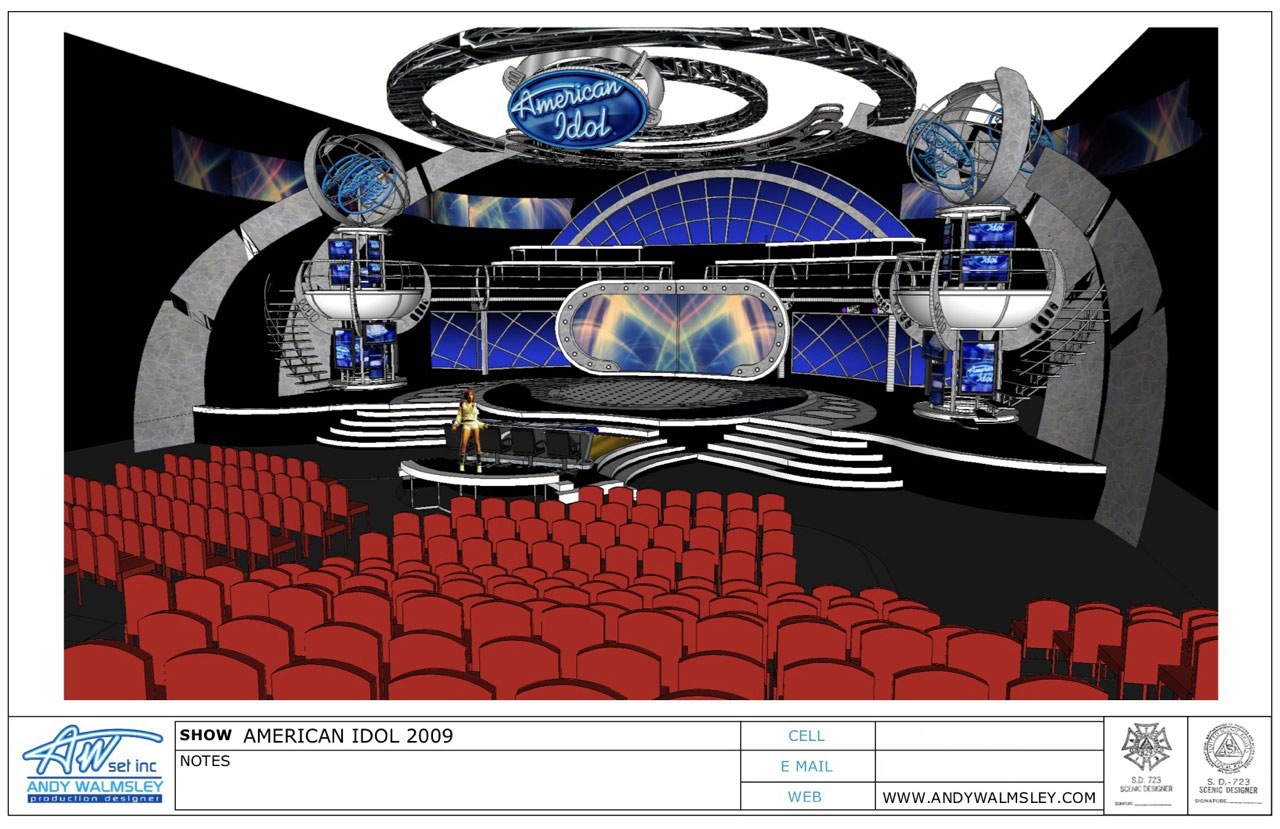 I’ve designed about 14 Las Vegas shows now, which is more than anyone else I know. In theater my most famous show was Buddy — The Buddy Holly Story. That production was duplicated in 13 countries. My other big theater gig is Blood Brothers, a fantastic musical which is still running in the UK nearly 20 years after I first designed it.

What is your favorite part about your job?

The ultimate satisfaction for me is to spend a few days creating a model, virtually walking around every inch of it, then only a couple of months later find myself walking around the real set. Most of my sets are huge; they usually occupy sound stages that are 100 feet by 200 feet in size. To be walking around something that you visualized and that came out of your head (via SketchUp) 10 weeks previously is an amazing feeling of power. I think a lot of designers are megalomaniacs, and I think I can see why. 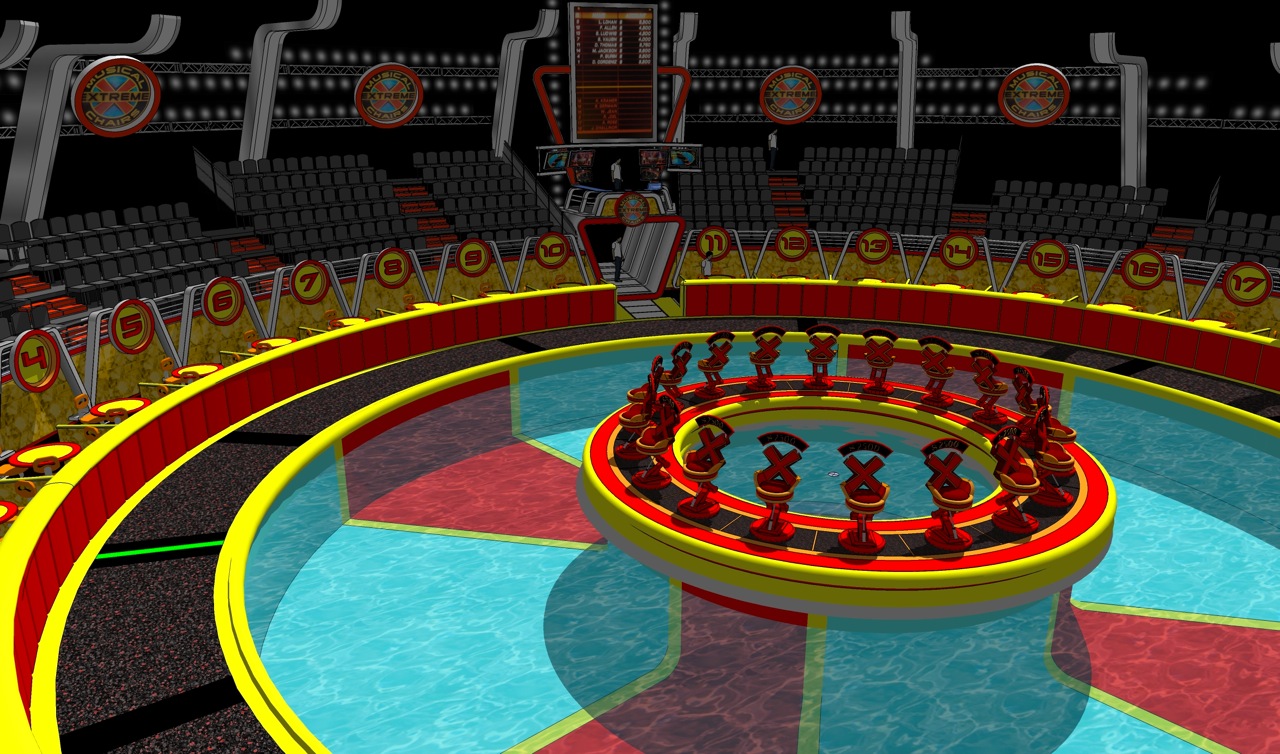 A concept design for an "extreme musical chairs" variety show

How long have you worked with 3D modeling software?

I initially invested in a full Mac set up in the 90’s. As if by destiny, the week my hardware and software arrive in the mail, I also landed a huge job and didn’t have the time to learn how to make the leap from a drafting table and pencil to digital tools. Then another job came in, and another, and from that moment I have never been out of work, but also couldn’t find the time to learn to work with the new tools.

Fast forward ten years. I had moved to The States to work on American Idol. Shortly after arriving, I purchased a bells-and-whistle drafting table and rented some office space at Henson Studios so that I could set up a model-making office. Pretty soon, I was being mocked by colleagues for still drafting on paper. I signed up for a Vectorworks course that the Art Directors Guild was offering and struggled for the first month. The instructor, Don Jordan, had the patience of a saint, and during one of the class breaks he showed me a new program that he thought I might find easier to grasp — and that was SketchUp. I remember staring at the screen like a caveman looking at the first wheel: I was in love immediately.

I’m musically inclined so I often relate my experience with 3D modeling to this metaphor: musicians can pick up some instruments and just instinctively be able to play them. I can grab almost any instrument that you blow into and get a tune out of it in seconds. But string instruments, I am hopeless with. SketchUp is just one of those instruments that I could play instantly.

Why is 3D important in set design?

Let me describe the process as it was prior to SketchUp Pro. I would go to a meeting about a new show and get briefed, go back to the office and start drafting roughly in pencil, then take those drawings to my two or three model makers (who I had to pay every Friday). They would then spend a week or longer building the models. I would take the model (often on a crowded London train) to show to the producer, he would inevitably want to make changes, I’d take the model back and the assistants would break the model apart to rebuild it with the adaptations. All of this was extremely time consuming, very expensive. Model materials aren’t cheap, and model-making employees (and their models) take up a lot of space. I also don’t miss constantly breathing in toxic glue and paint fumes. 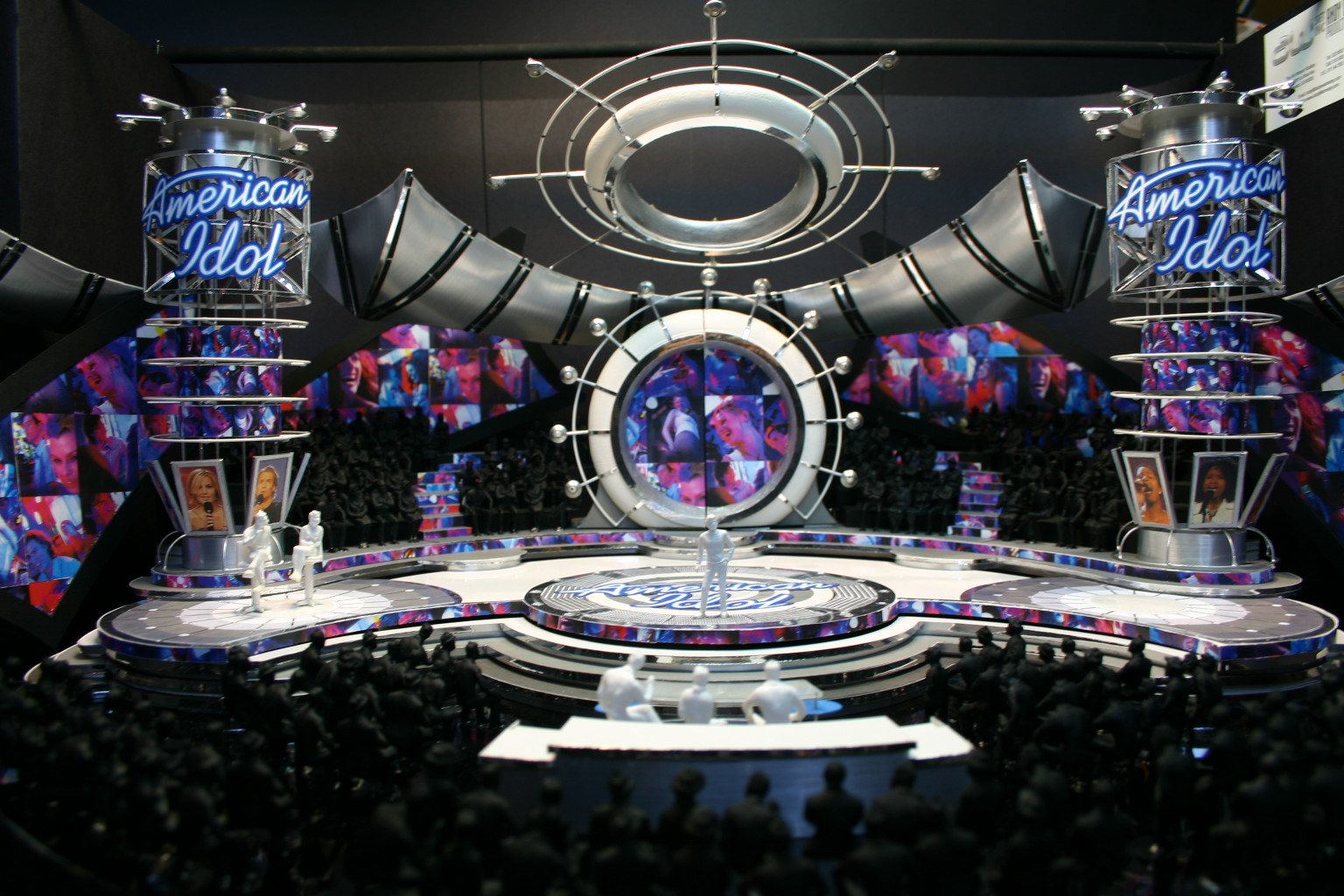 One of Walmsley's older, physical production models for American Idol

Now with SketchUp Pro, I don’t even need an office. I go for the initial briefing and can usually turn around a very complex SketchUp model in one (or max) two days with no office, no employees, no equipment, no fumes. The best part: I can now email designs to my producer without travel and I can make changes by quickly editing the SKP file, often in a hotel, an airport or a Starbucks. Now, that is Freedom. I have said it many times, and it sounds a bit overdramatic, but SketchUp literally changed my life.

Tell us about a particular design problem that you’ve been able to address in SketchUp.

Glossy floors. So much of entertainment involves GLOSS. We love glossy floors and reflective surfaces: it’s all glitzy showbiz stuff. It’s also a curious modeling problem to solve. Sometimes I will assign the stage floor a smoky, transparent surface and then copy the entire model above and scale it inside out underneath my transparent floor. It will really look like the above scenery is reflected in the floor but really you are looking at a complete copy of the model under the floor.

Do you have any advice for other SketchUp users?

My problem is that I have gotten super fast on SketchUp, but done so using my own little tricks and not really utilizing the software properly. Have you ever seen a bad driver in a car? They can drive well enough but they are using the wrong hand on the wrong side of the steering wheel. Doesn’t seem so safe, right? That is me with SketchUp: I make it do great things, but I always think there may be a better way to save time beyond just working quickly. One of my resolutions this year is to get some one-on-one training from a real expert to help me master some of the fundamentals. That should help me get up to super, scary modeling speed but with my hands at 10 and 2 on the steering wheel.