It's not every day that you go from designing homes to creating Sci-Fi movie sets. But for SketchUp veteran and Set Designer Chris Fagan, this was just the career challenge he was looking for. We sat down to learn about his journey to Hollywood, his design process, and how visualization tools are necessary to keep up with the caliber of cinematic products.

It's hard to get into the film industry, what is your background and how did you get started?

I attended Skidmore for Art School and then the City College of New York (CCNY) for graduate school in Urban Design. So I think that the easiest way to describe my background would be as a designer that works in multiple mediums. In particular, I do a good deal of freelance film design work as a set designer, but my work and background experience actually began in architecture. I own a traditional architecture firm (Fagan Design Build Studio) and a start-up company (PowerDocks) that innovates new products for the marine tech industry.

I got started in the film industry in a sort of roundabout way. An old friend named, Kevin Lang was working as the production designer on a low budget indie horror film. He knew that I designed buildings and asked if I would be interested in volunteering some time to help him draft a creature-bed prop for the movie. The only real compensation would be a film credit as a set designer. I honestly jumped at the chance and we, in fact, did design some cool monster-bed thing. During that project, I met some of the crew members and they, in turn, called me to work on other film projects. Finally, after a few years of working on various film and television shows, I was able to formally qualify to join the US-829 or the Scenic Designers Union. I feel like my story is a very typical film story: tough to break into, but when it happens, it's an awesome industry to work in.

For those not involved in the film industry, what does a set designer do?

The primary function of a professional set designer is generating various types of drawings in support of a larger film production. In my experience as a set designer, I have worked in two different capacities. The first one being conceptual or schematic designs for various sets. These drawings are intended to show the overall visual concept for a movie set. They can also be used to help the production crew make larger stylistic and fiscal decisions about a film. Specifically, whether certain sets are worth the expense of physically building versus trying to find existing locations to shoot on.

The second function of a set designer is to create construction drawings. These drawings are intended to be used by carpenters and craftsmen in order to physically build the movie set. These types of plans contain very specific measurements and notations in order to ensure that the schematic concept translates into the physical set.

Set designers can work with a number of different people and trades during a film production. During the schematic design phase of a project, a set designer could be working more closely with an art director, a production designer, or even a film producer. The goal with these types of collaborations is to ensure that the larger, visual concept of the film is being translated into the set. As the construction design phase moves forward, the set designer works with a number of other different film professionals. These professionals include film carpenters, scenic painters, set dressers and crews for lighting, sound, and stunts. Overall, the idea is to ensure that the sets not only look great but also provide proper functionality for filming. 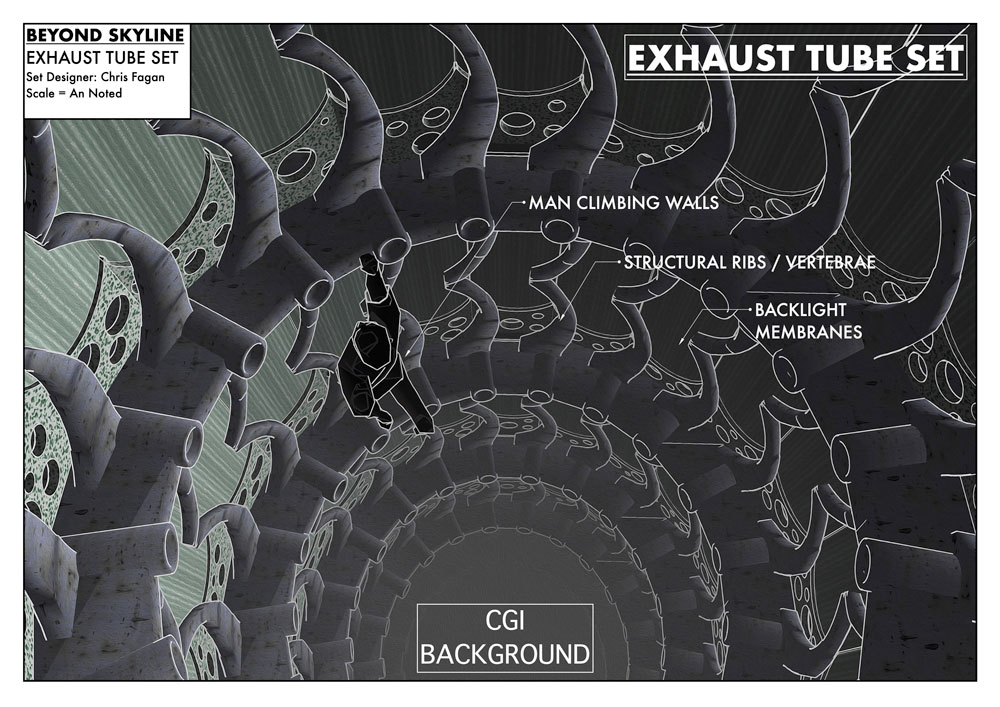 Using SketchUp to highlight schematic and construction design documentation in a Sci-Fi thriller!

How did your use (and love) of SketchUp begin?

Overall, I have always been really interested in three-dimensional design and architectural illustration. I started out working free-hand and eventually learned orthographic drafting. This is basically the traditional method used to draw architectural buildings by hand. About 15 years ago, I took a software class in SketchUp and that really changed my entire perspective on design. Suddenly, I could easily get the ideas that were in my head translated into an organized virtual space. Working with SketchUp also allowed me to easily express my own design ideas to other people with the use of 3D models, renderings, and animations.

SketchUp is a great tool for set design projects. Typically, I am working under the direction of a production designer. They will, in turn, provide my location information and concept ideas and sketches for what they are looking for in a set. Then, I translate the schematic imagery into a 3D model and try to figure out how to physically build the set. As a software, SketchUp is perfect for this type of work because you can design quickly, create a presentation, and then easily make changes and iterations. 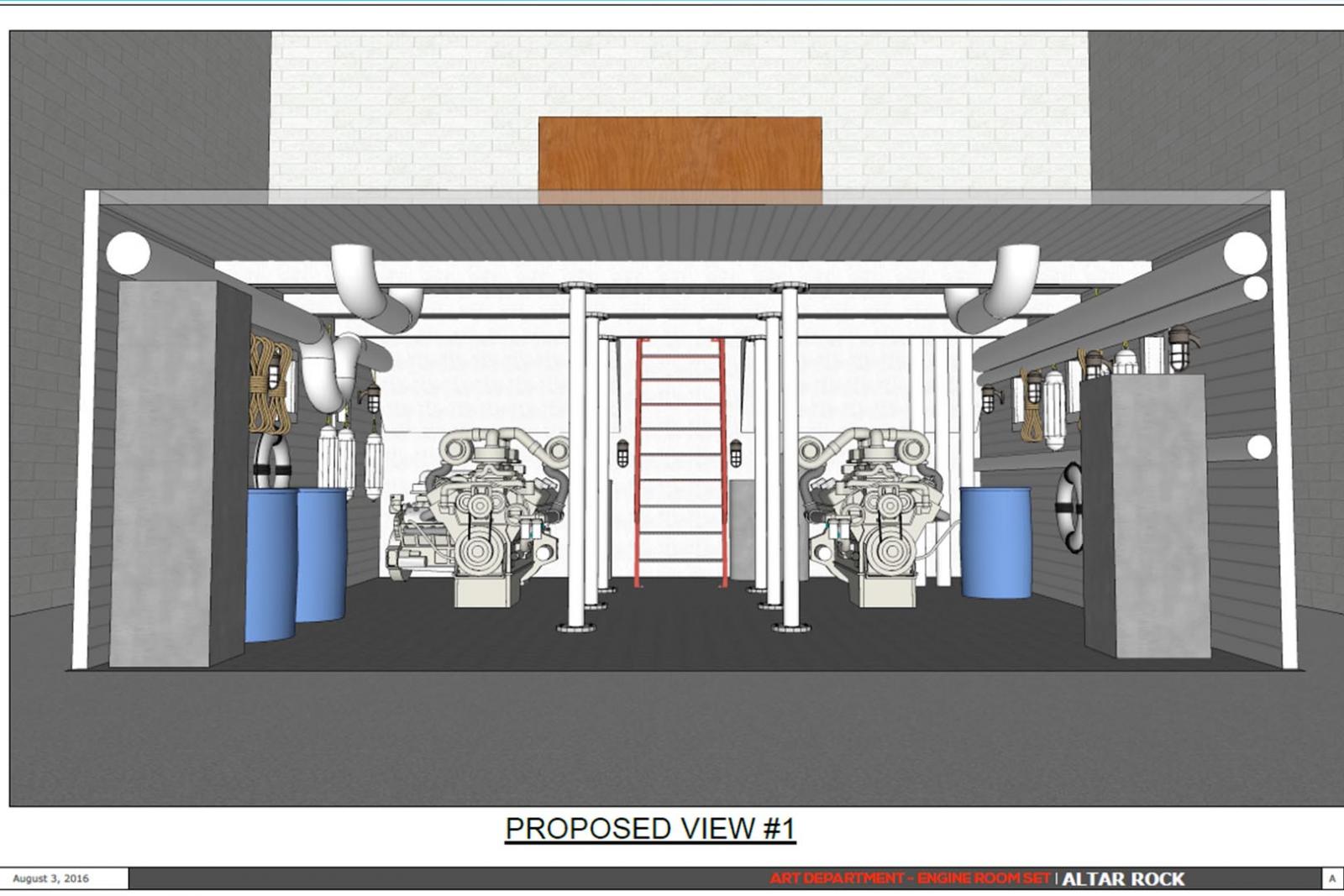 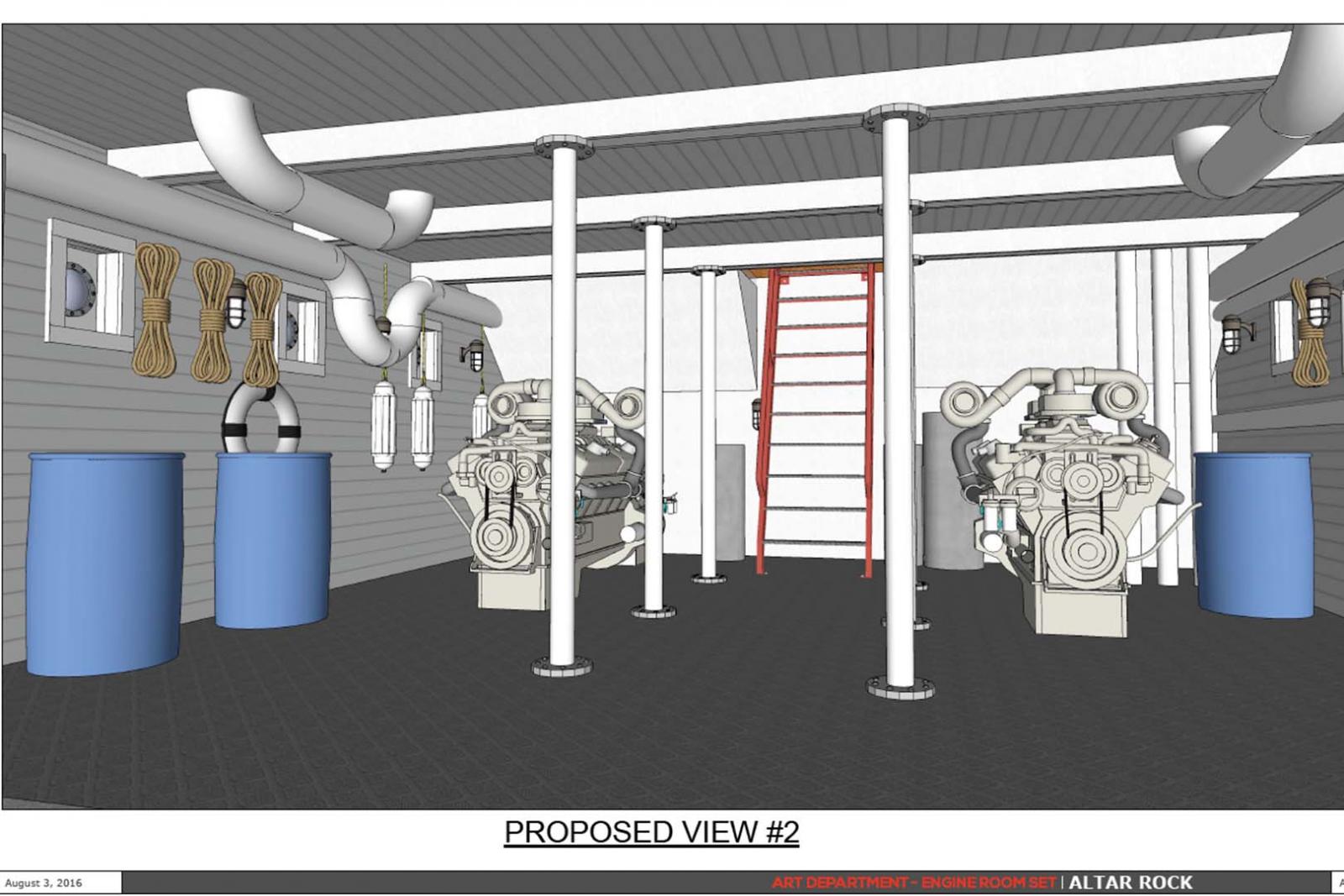 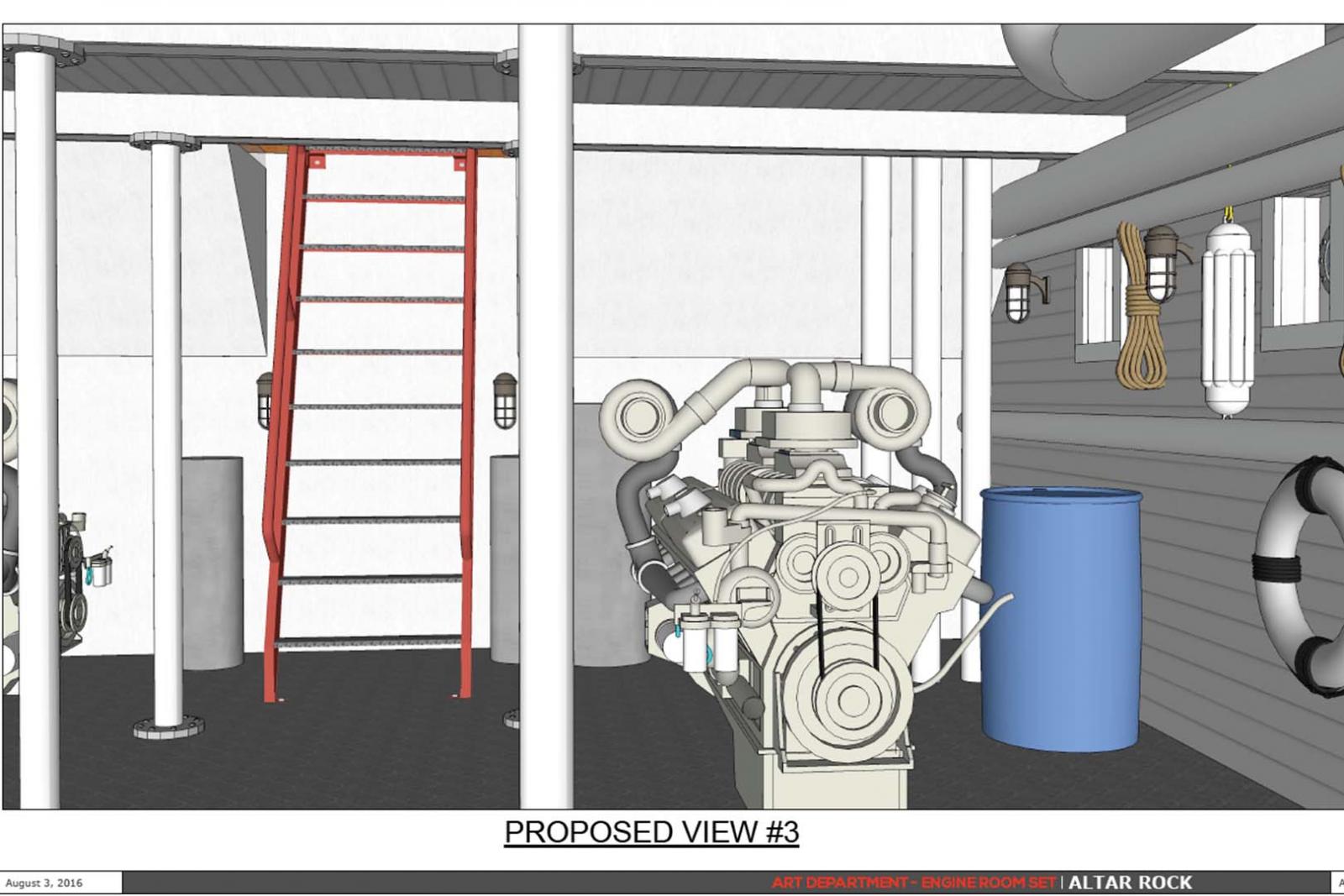 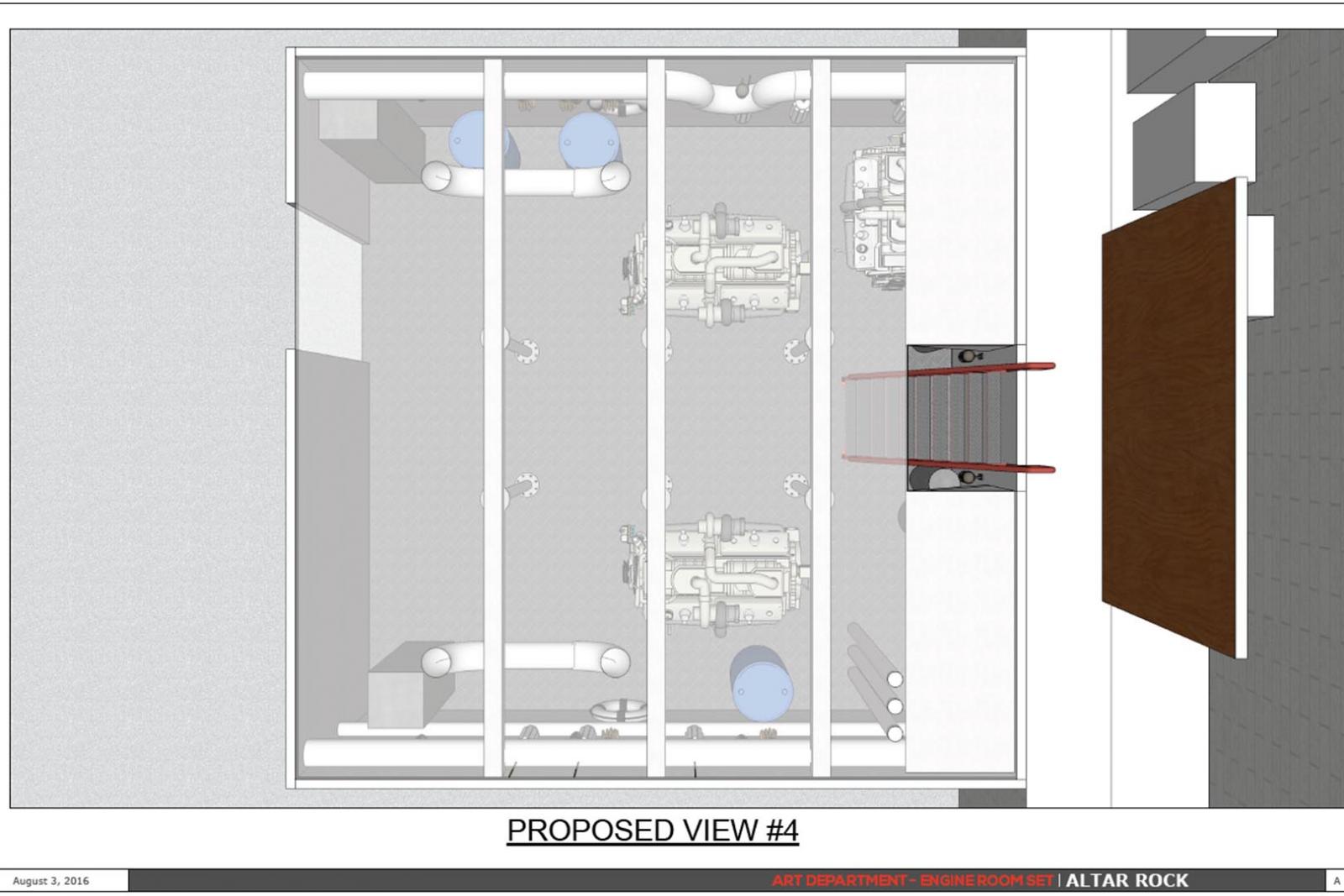 Fagan uses scenes to highlight the different views of a set in the film, Altar Rock.

Since most of your work in the film industry involves set design, how do you take your ideas from drafts to final construction? Do you do all of this in SketchUp?

Over the past few years, I have tried a few different workflows, but now I do all the modeling in SketchUp and export all the drawings from LayOut. I always model the movie sets in 3D with the ultimate intention of producing construction-level drawings. Basically, it’s a matter of developing the right system of layers, scenes, and building groups and components. For example, I will build a movie set out of various components but then copy and isolate each individual component to another location within the same 3D model. That way when I jump into LayOut, I can show the entire set design and dimensions of that individual component in a clean space.

Using LayOut to detail the construction dimensions for a set in the movie, The Discovery.

What does the hierarchy look like in the film industry? Who makes the final call? And does that ever hinder your creativity?

I feel strongly that regardless of whether you are creating a new building or movie set, good design is a product of collaboration. In every case, I will work to present the best ideas that I can and then lobby to get those ideas built. That said, a lot of the most successful results come from a team of designers with individual perspectives that can come together to produce a unified design.

You mention that collaboration is huge in the film industry. Would you say that SketchUp helps with collaboration? If so, how?

SketchUp is a great tool for collaboration. It’s a program that lots of designers are familiar with. Therefore, it is easy to share progress in a design. Also, the SketchUp Viewer apps work really well for sharing ideas with people who might be less fluent in SketchUp.

Animations are great tools for designing sets. I will often build out basic ones just to show the production team how the set will look from various angles. Also, they allow some sense of perspective with different camera angles. One example of this was for the movie, Beyond Skyline. It’s basically an alien invasion movie, and a lot of the story takes place on an alien spaceship. The design of the ship itself was comprised of very organic forms that look like a massive body with ribs and tissue membranes. The style was really dynamic, but from a constructive perspective, it made the sets extremely complicated. Using SketchUp help mitigate the confusion when building these sets.

Exhaust tube set design animation using SketchUp to highlight how the scene will look in the alien invasion film, Beyond Skyline.

Are there any other uses of SketchUp in the film industry that we haven’t touched on?

I recently started a film project where I used SketchUp for creating concept art, or illustrations. This project is called The Savage and is regarded as pre-production. Basically, the script is being worked on along with lots of other logistics related to finance and production locations. As a part of the process, I have done a number of drawings and 3D models to articulate various aspects of the script. All of these drawings are regarded as concept art and have been used in presentations to investors and look books for the project. 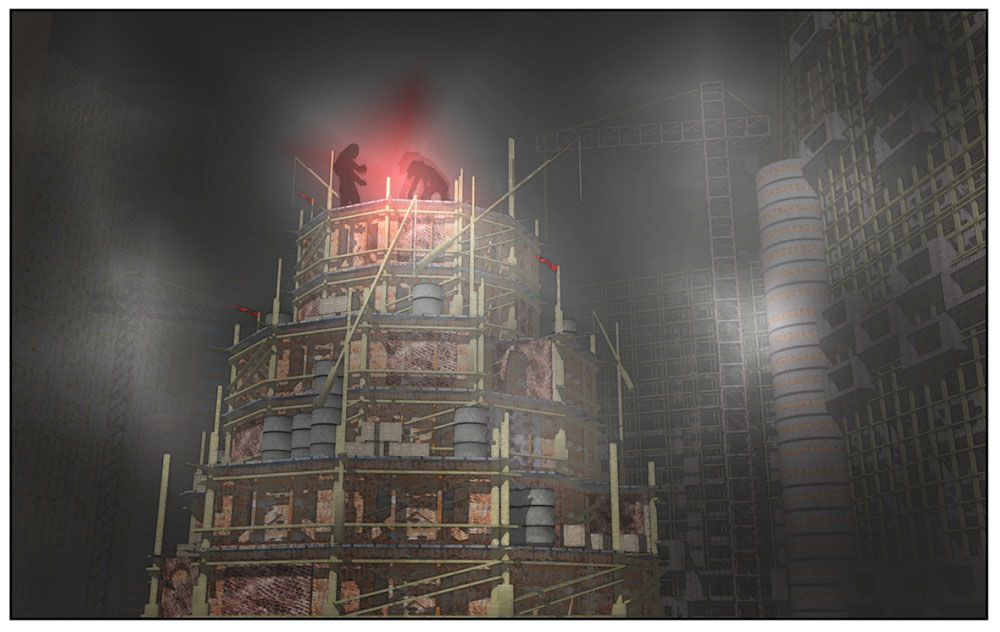 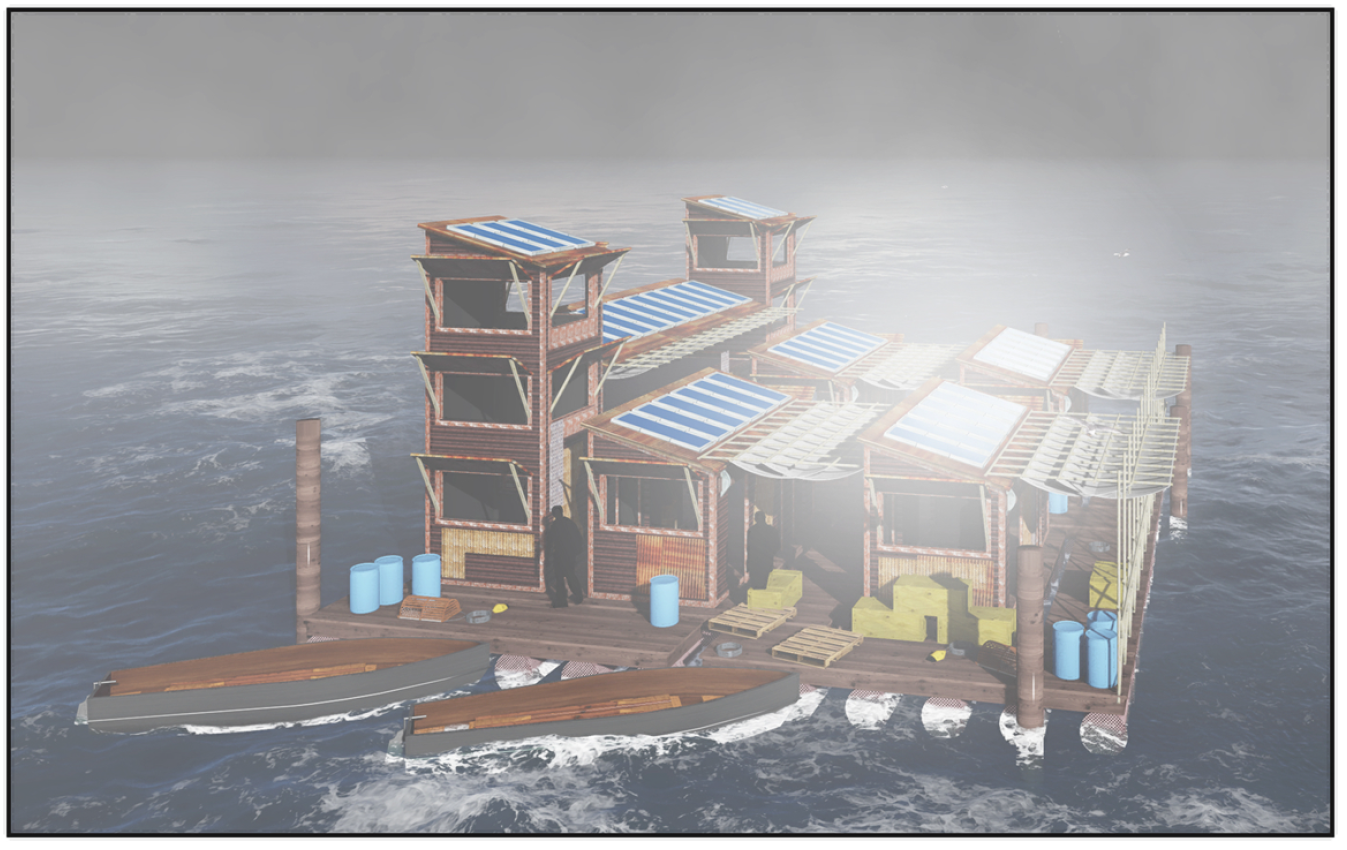 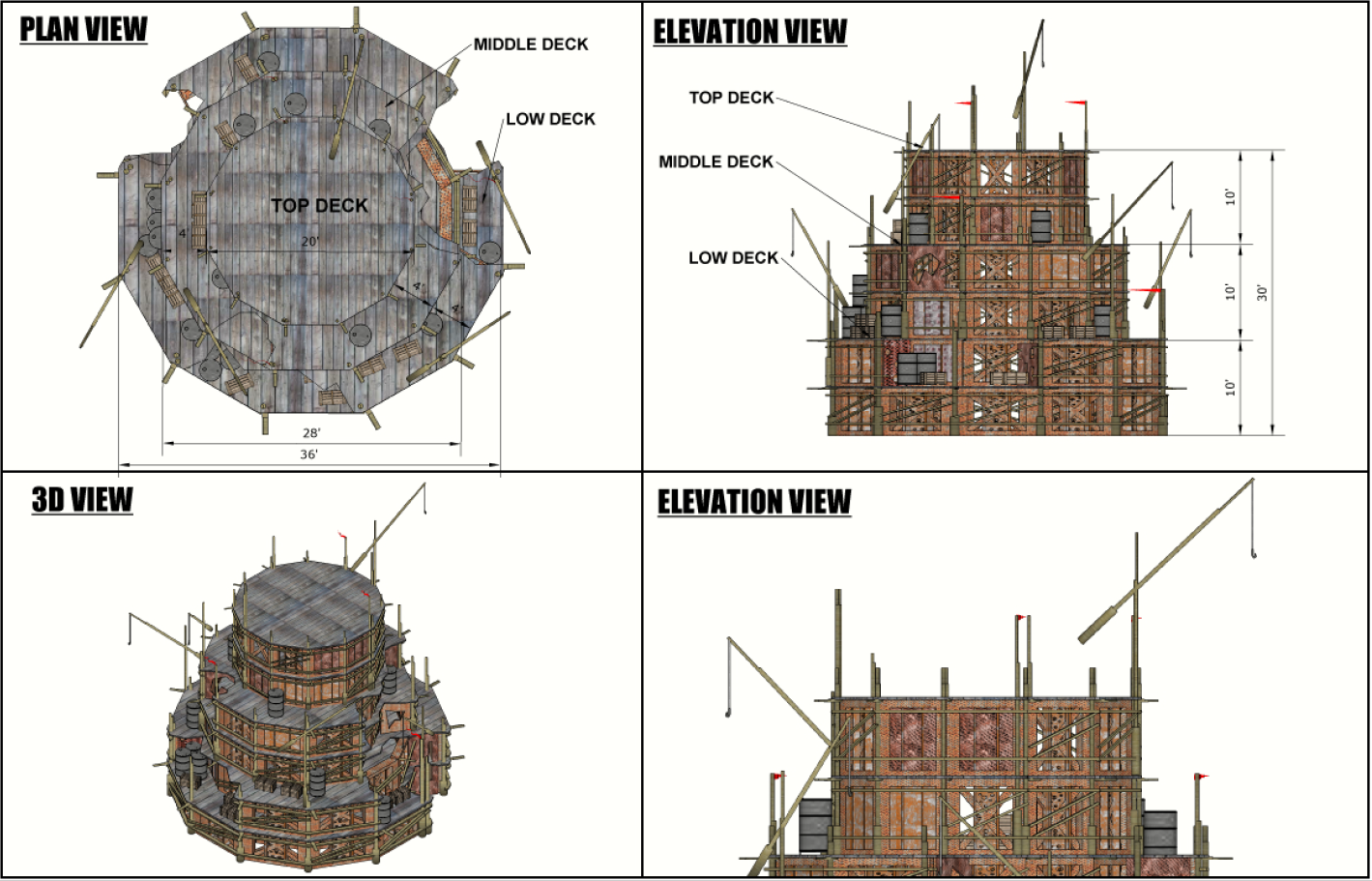 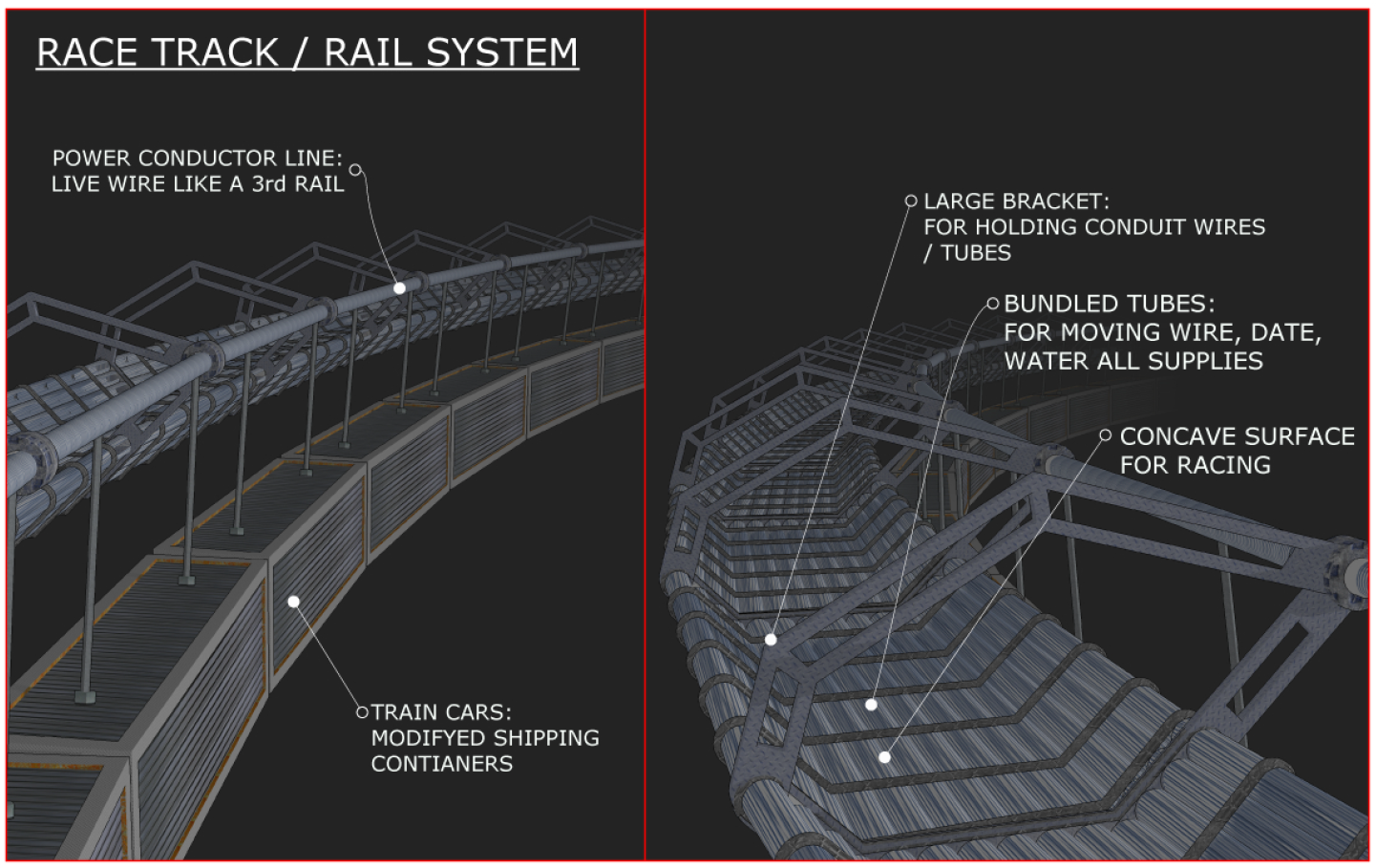 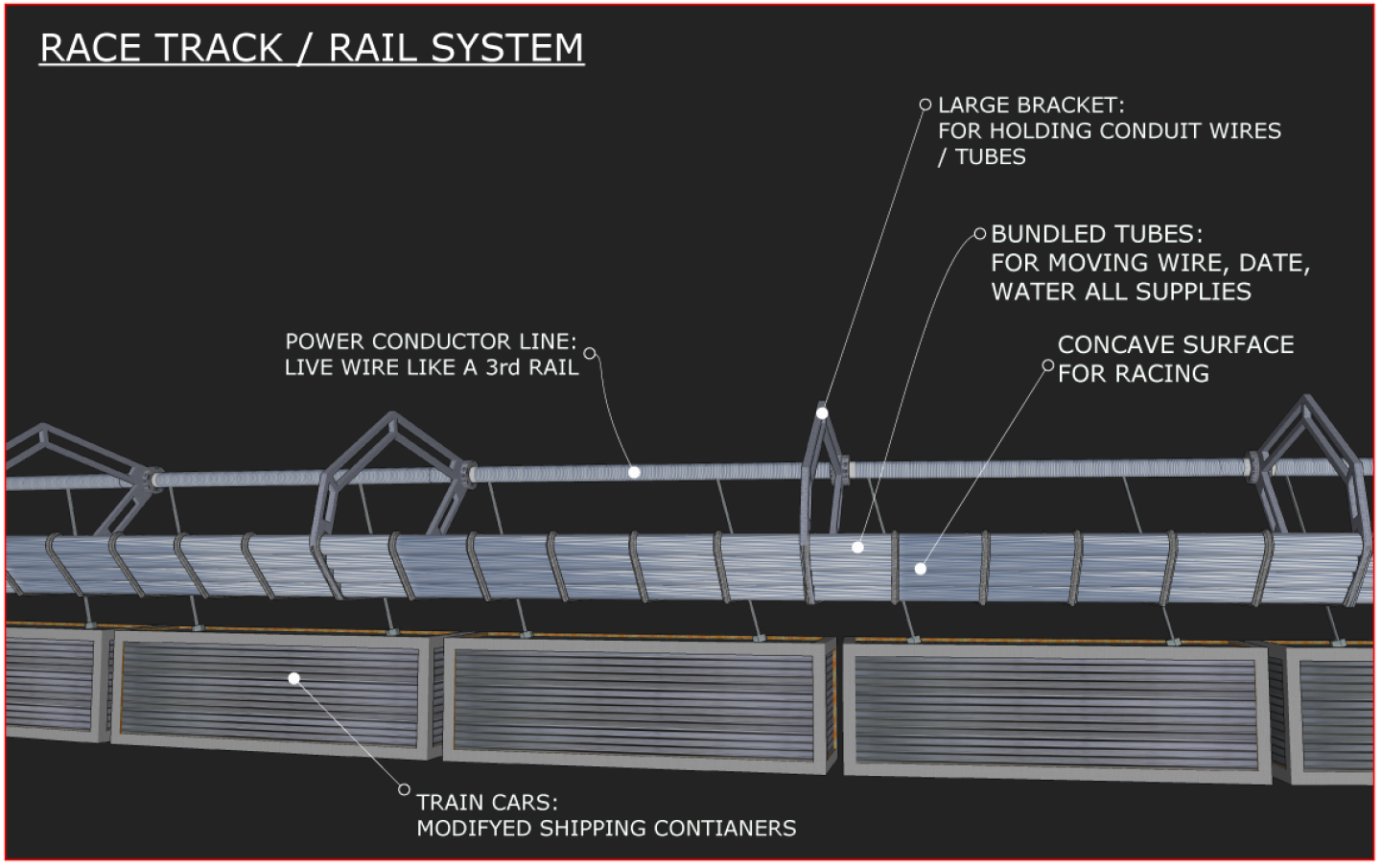 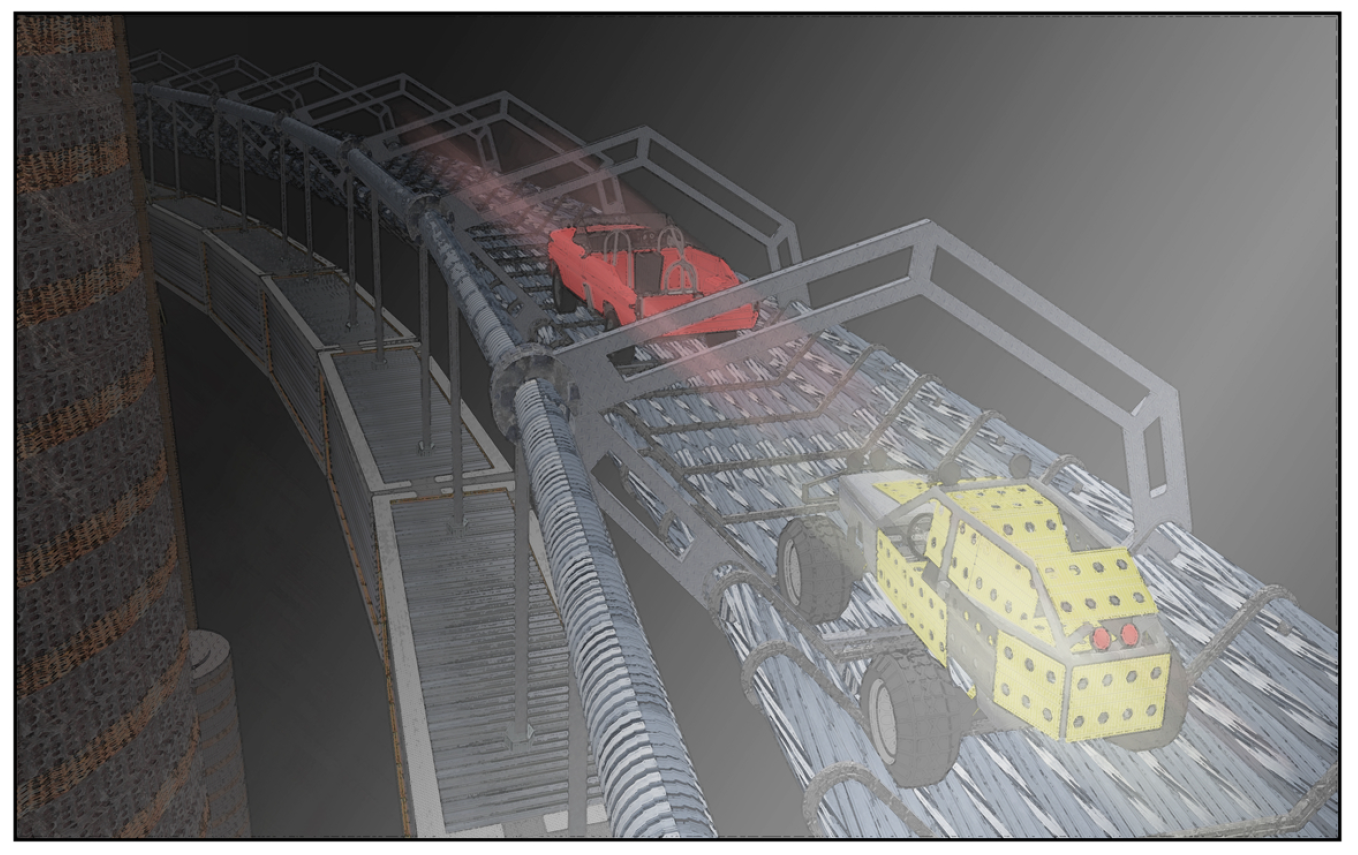 Bringing a script to life in SketchUp!

Also, I have to mention my documentary! About 10 years ago when I was in grad school, I made an entire documentary short film with SketchUp animations and iMovie. At the time, I just could not reasonably work out any way to do the project. Now, I am sure there are other ways to make short, animated films, but I can say that with the right animation exports and editing, it is possible to use SketchUp to make a film. Has SketchUp ever had a film festival? 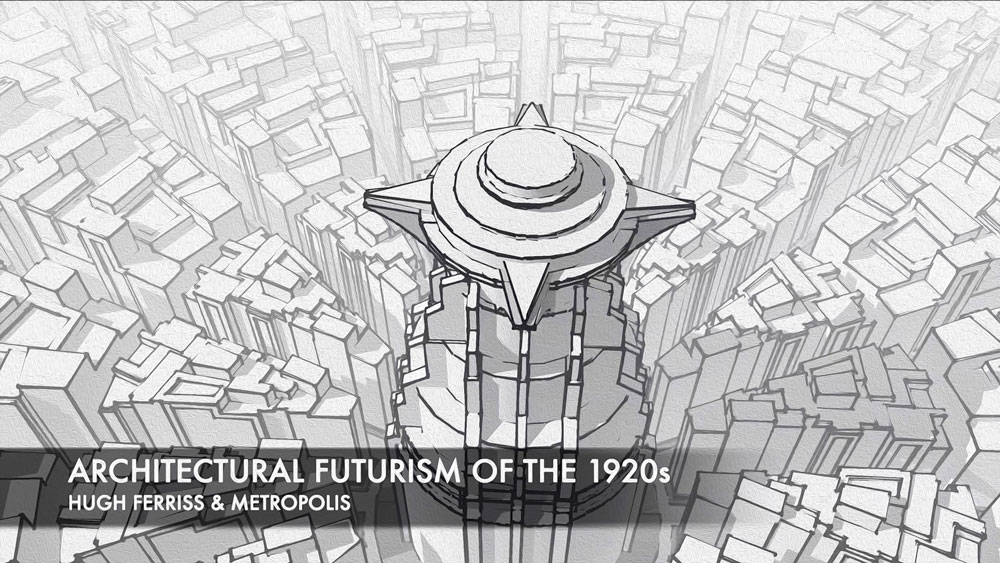 The SketchUp Sundance film festival? Fagan’s animated film would be our first submission!

What are some of your favorite film and TV projects?

I would say that my favorite project to date would be a Netflix film called The Discovery. The movie stars Robert Redford, as a mad-scientist-doomsday-cult leader who lives in an old mansion on an island. In an effort to not give too much away from the film, I had the unique opportunity of designing and building Robert Redford's laboratory and ultimately his machine.  Watching the cast and crew shoot screens on my set was a truly surreal experience and without a doubt my favorite project to date. 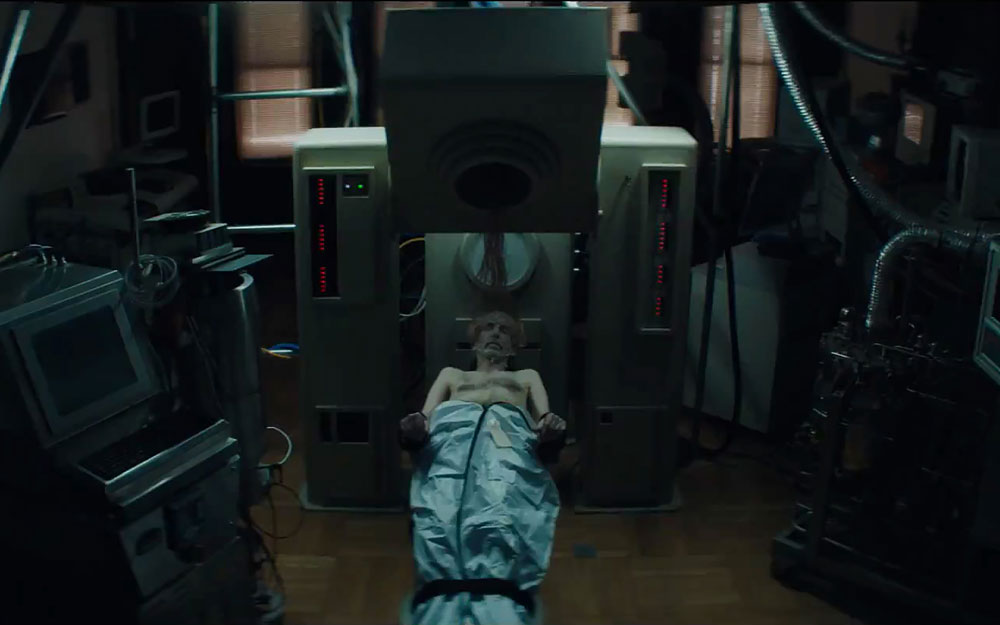 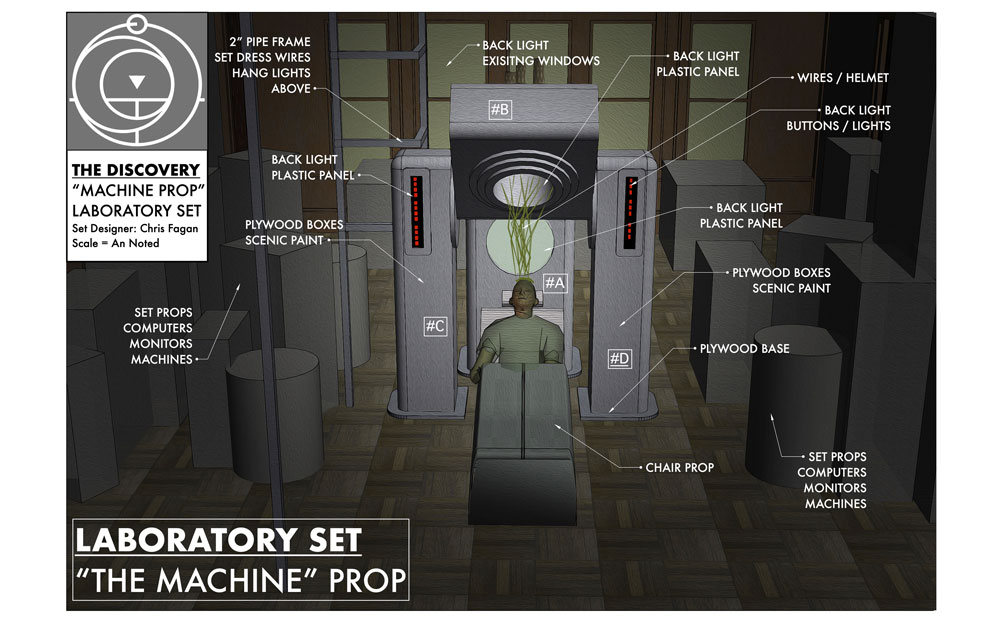 There’s no blueprint for building a mad scientist's lab, but Fagan brings the vision to life with SketchUp. 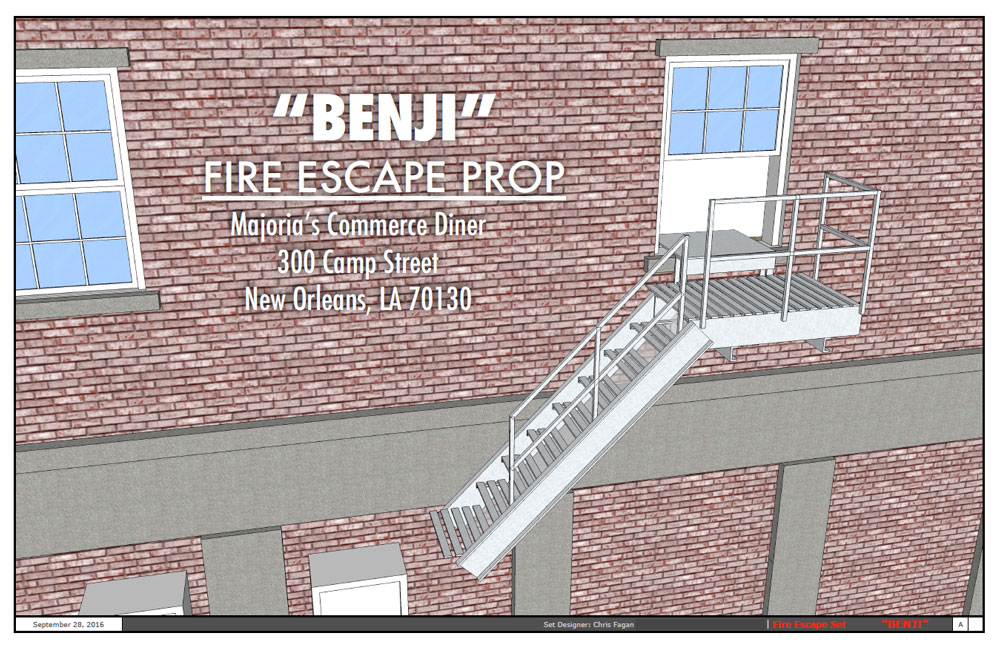 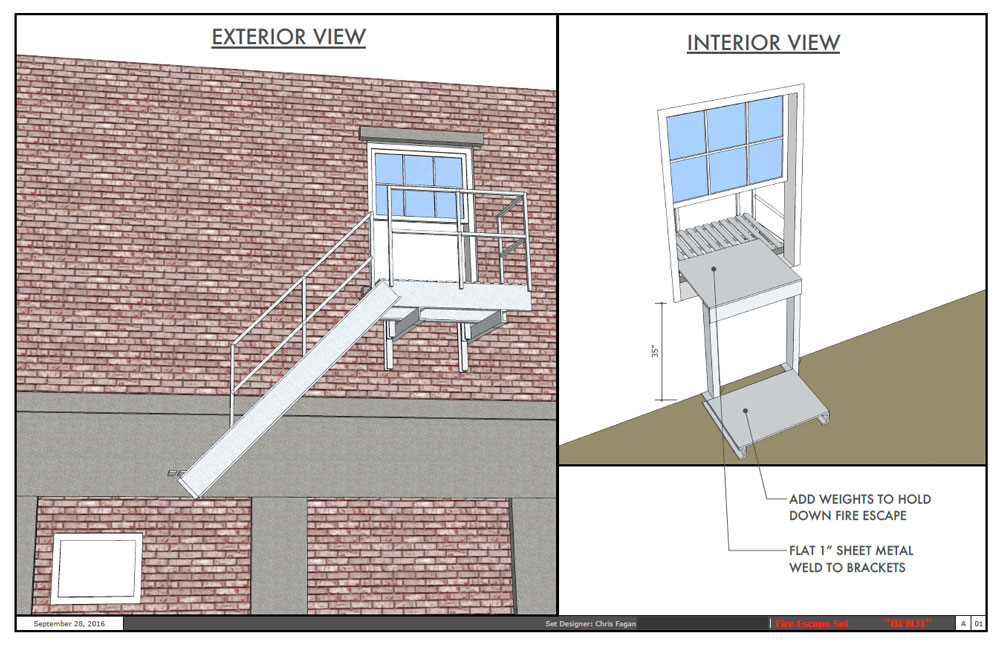 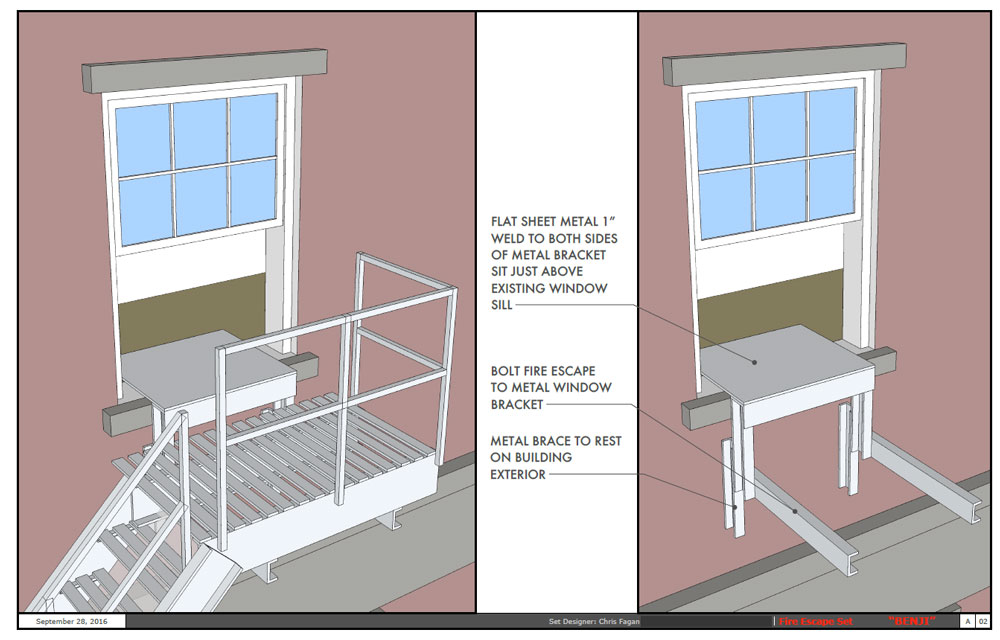 Fire escape props in SketchUp and LayOut for the film Benji.

You clearly use SketchUp in a lot of different ways. What makes you keep coming back to SketchUp?

I have used a lot of 3D modeling software in my career. Some of those programs are incredibly powerful and can produce some really amazing results. That said, I still find SketchUp to be the easiest program for modeling. For me, it is the fastest tool that I can use to draw on a computer in 3D.

"Ease of use and speed is what always makes SketchUp the best."

Even when I need to utilize a different 3D or rendering software, I will always do all the modeling in SketchUp first and then export it out. For me, it is just the best option for 3D drafting.