In this article, we speak to CBT Solutions' founder Byungho Eom, a twenty-year architecture veteran based in Korea and a SketchUp user for over 16 years (wow!). We delve into his 3D modeling archiving project for Ilshin Spinning Co., a 1930’s factory set on a historic site that manufactured cotton, blended yarns, knit, and fabrics.

All media courtesy of CBT Solutions unless otherwise stated. 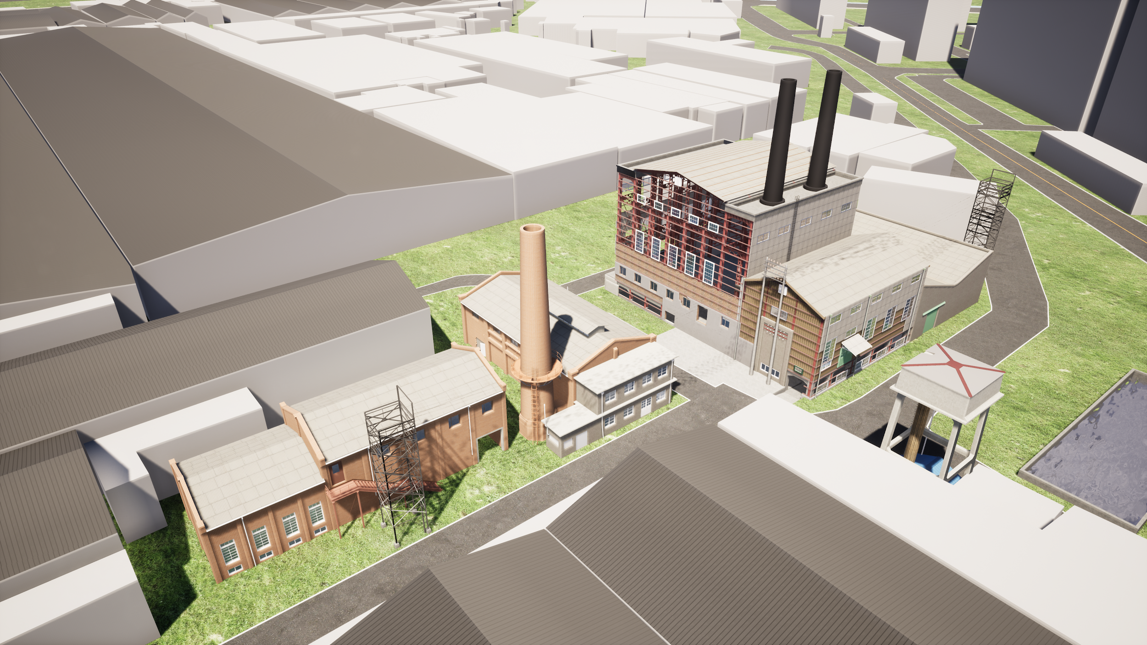 Give us a little insight into your background.

I began my career in computer graphic production for buildings, as I majored in architectural engineering. In 2004, I discovered SketchUp when I experimented with a variety of modeling software. SketchUp was so intuitive and convenient to use, that I decided to drop all other 3D software.

“SketchUp was so intuitive and convenient to use, that I decided to drop all other 3D software.”

I’ve used SketchUp and various extensions while working at engineering firms to model tunnels, bridges, and roads. I’ve continued to use SketchUp in my own practice, CBT Solutions, for drawing-based modeling, 3D scanning, reverse engineering, interference checking, quantity takeoff and calculation, and other related works. We also provide SketchUp workflow consultations and training services to other organizations and companies.

We know you recently started a new 3D modeling archiving project. Could you share some background on this project?

Numerous modern historical sites built in the 1900s were destroyed without serious consideration, mainly because of negative sentiments towards the Japanese colonization period, as well as the rapid development in the country.

Our local governments recognized the need to remember and acknowledge modern history, to accept that although difficult and embarrassing, our past is still a part of our history. As such, starting in 2010, Gwangju city annually selects sites to archive as part of their Modern Building Records Preservation Project. This factory was selected in 2018. 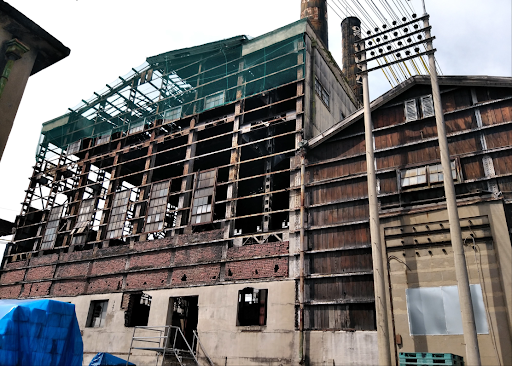 The factory’s power plant outer shell was built in the 1930s.

With these archives, the community is able to explore and understand the significance and architectural value ​​of historical buildings.

What do these digital archives usually consist of?

The archives consist of drawings, photography, and related academic research. Although these assets are valuable, they would not be sufficient for studies or any restorations if the building is damaged by fire, typhoons, or other unexpected disasters. It was also challenging to garner attention from local residents with only several sets of drawings and photos. To counter this issue, we proposed 3D scanning to create 3D models. This would allow us to not only record the accurate data of construction but also make information accessible to residents through video and VR.

“To counter this issue, we proposed 3D scanning to create 3D models. This would allow us to not only record the accurate data of construction, but also make information accessible to residents through video and VR.”

The data that was generated could also serve future urban regeneration. 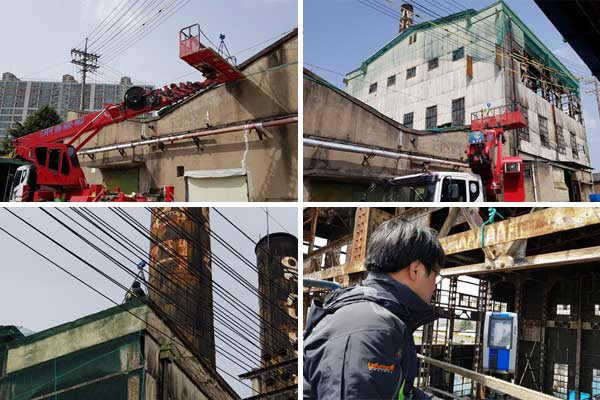 Point-cloud data of the factory.

We find the biggest complexity of a city’s development is the connection between its past and future identity. For example, we did an urban regeneration project with Gwangju city on Penguin Village, with a purely elderly population. After its revival, it’s now a village for the elderly as well as young and new artists.

Can you talk us through the process of this project?

The building is very old so there weren't any 2D drawings to work with. To kick off the project, we used a 3D scanner to acquire accurate measurements of the current building. Using the Point Cloud Data and research, we worked backward to reproduce 3D models of the facility using SketchUp.  With these models, we can create assets like drawings, images, and VR content.

“SketchUp is the most fundamental and essential content creation tool for everything.” 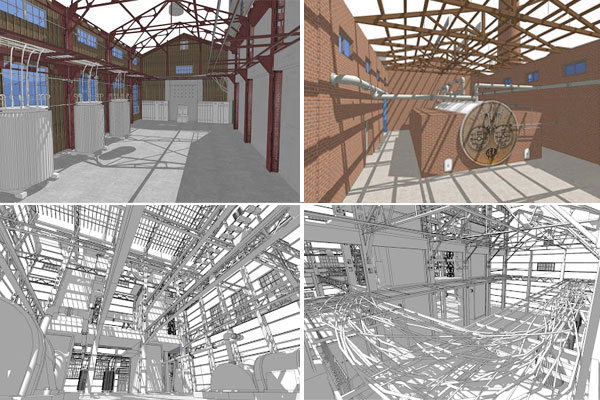 SketchUp is the most fundamental and essential content creation tool for everything. After all the models were reproduced, we created a video to understand the building operating systems in the early 1930s.

Video showing the creation of a 3D model from point cloud data.

How long did this entire project take you?

This project was planned to launch at the Gwangju Architecture & Culture Festival, so there wasn’t any room for delay. We kicked off in March 2018 and had eight months to complete it. We spent the first month carrying out preparatory work, six months generating 3D scans, 3D models and 2D drawings, and the final month documenting the process in reports. Using SketchUp, we were able to create accurate work and meet the tight timelines.

Model of the facility.

Were there any fascinating learnings from this factory?

There is a big reservoir nearby to supply water constantly; this makes the Ilshin Spinning factory the only local industrial facility to have its own dedicated thermal power plant.

The historic power plant's exterior is modeled in SketchUp and rendered using Twinmotion.

The power plant has an interesting steel-reinforced concrete structure, which was unique for the time it was built. People were not interested in investing at that time, so a steel and concrete structure building was rare in Korea. We think this structure was influenced by the Great Kanto Earthquake that struck Japan in 1923. The overall appearance of the power plant was vertically arranged with L-shaped horizontal steel beams at one-meter intervals, finishing the exterior with windows and steel-framed, slate wall-panels.

The factory is built using a modular structure, and mass-produced materials. This makes the building very efficient for repairs and facility management, as parts can be easily replaced. This factory also has semi-fireproof characteristics because its steel-reinforced concrete structure is more resilient than the wood or brick structures typical of that era.

We don’t know why the Ilshin Spinning facility was built in this forward-looking way. Many suggest it was part of a war supply-chain for producing uniforms during WW1 and WW2.

In any case, it was considered more advanced than other factories in that period, and its structure allowed it to survive through the Korean War in the 1950s.

It can be considered an early inspiration for modular systems that are so prevalent today.

Did you face any challenges in this project?

As the building was built during the Japanese colonial period, there are very few photographs of the archetype before its reconstruction after the Korean War in 1945.

Sitemap of the facility.

That meant that the only reference for building the 3D model was the 3D scanning data we gathered and images of other factories that were built during the same period in Japan. By chance, I was able to find a picture of the plant building, just two months before the end of the project. This picture was taken before the boiler rooms were built, which now blocks the front view of the plant’s building. So it was an ideal resource to draw its original front elevation. When I used ‘Match Photo’ in SketchUp to check the accuracy between the picture and 3D models that I created, I was really thrilled.  I screamed with joy and relief when the reconstruction model data and the photo matched almost 90%.

“When I used ‘Match Photo’ in SketchUp to check the accuracy between the picture and  3D models that I created, I was really thrilled.  I screamed with joy and relief when the reconstruction model data and the photo matched almost 90%.”

With the photograph, we uncovered facilities that were non-existent today, such as a coal-propelled hoist, a deck on the left entrance, and staircases. By adding these to the models, we could reconstruct the building close to its original form.

What are some of the extensions that you used to create this SketchUp model?

Of course, Undet for SketchUp was used to create 3D models based on point cloud data, and I also used these extensions to help with various aspects of the model:

I really appreciate SketchUp Extension developers and am a big fan of Fredo6’s useful, innovative, and free extensions. They’ve transformed my work from the start of my SketchUp journey.

What are your favorite SketchUp shortcuts?

I don't have any special shortcut tips for SketchUp, but I set forty keyboard shortcuts to increase my modeling efficiency. I use AMS Window Setting to maximize workspace and system running speed, as I’m using many extensions. And for selective deleting of multiple faces while modeling, I use ‘Push/Pull’, instead of the ‘Select’ tool, because when I hover my cursor on a face, ‘Push/Pull’ tool automatically selects it.

Do you see any trends in this industry in the near future?

With Korea’s population becoming older, the construction of new buildings has slowed down, and we are increasingly remodeling existing buildings.

This creates a focus on urban regeneration projects, and the most crucial part of creating accurate design and construction is reverse engineering. More projects will require 3D scanning and modeling technology for the renovation of existing buildings and villages.

Fast-forward presentation of the spinning factory.

In the future, I believe that architecture software will not only be used for 2D drawing and 3D modeling but also to deal with advanced data features, such as point cloud data registering and processing. This will be important for our performance.

I’m currently working on remodeling the Jamsil Olympic Main Stadium using reverse-engineering, which was built for the opening ceremony of the Seoul Olympics games in 1988. The size of the Stadium is 75,469㎡ and it has a capacity of 100,000 people. This is one of the largest buildings I’ve ever worked on, so it’s challenging for me. However, I know I’ll be okay with SketchUp as my solution.