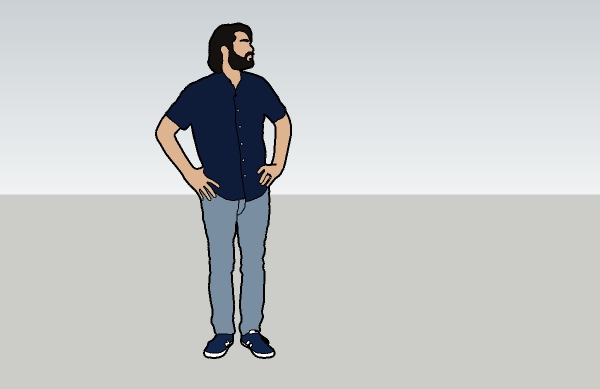 Let me introduce you to Sal — the newest scale figure hanging out around the SketchUp for iPad axis. He was instrumental in the app’s development, which makes him the perfect fit for the job!

Two Truths and a Lie (scroll to the end for the lie):

Tell me about your career and why you decided to join SketchUp?

In 2009, I moved to Arizona from Mexico to work for Trimble Outdoors. I enjoyed working for a company centered around the natural landscape. We developed maps, geocaching applications, and other software for outdoor enthusiasts. When I heard Trimble had acquired SketchUp, I was intrigued. After a couple more years, I moved to Colorado to work at SketchUp. One year later, I was asked to bring the mobile team in-house. One of my best-loved roles was building the mobile team where I eventually became the team manager.

At SketchUp, every day I learn something new. Everyone is ready to help out, and the company has transparent practices.  My team’s dedication is incredible; all of the engineers work hard and are inspired by what SketchUp can do for the 3D modeling industry. Plus, we have a culture club and fun celebrations. We see humans here, not numbers.

What was your role in developing SketchUp for iPad?

It all started two years ago when the team conceptualized bringing editing features to SketchUp Viewer. Customers were asking for ways to edit their models on the go, and we knew we needed to flesh out the idea further. So, we started fiddling around with potential editor features. We established that it was workable, and from there, we brought on more brain and work power to give the project more oomph. I managed the team, bringing SketchUp for iPad from conception to reality.

SketchUp for iPad is one of the longest projects I’ve worked on, and it’s rewarding to see users so pumped about a software release. I see people using the pen or touch screen to visualize their creations, and I smile. I’m psyched; everyone is psyched — it’s a good feeling.

Do you use SketchUp?

I use SketchUp at work and home. I’ve modeled my basement and backyard for visualizing renovations and for ‘what if’ explorations. For me, creating mathematical algorithms in SketchUp is fun. The modeling software can be used for traditional modeling or for developers to develop plugins and models. The Software Development Kit can be used to generate complicated geometry, that in a regular modeling environment, would be very difficult.

What do you enjoy doing in your spare time?

I like to learn and research new technologies. My latest ‘pet project’ is trying to understand the world of the blockchain, which is a system of recording information in a way that makes it hard or impossible to change or hack. Technology fascinates me, and I’m a big fan of MegaMaker, a podcast for creators and software engineers that pushes the boundaries of innovation.  I’m always curious, and when I learn new technology, it brings a fresh perspective to my work at SketchUp.

I spend a lot of time with my family and raising my three children. I’ll play video games with my family or alone; my favorites are Fortnite, Call of Duty, and Clash Royale for mobile. Getting outside is another essential part of my life, and I often go mountain biking on trails or hiking around where I live. 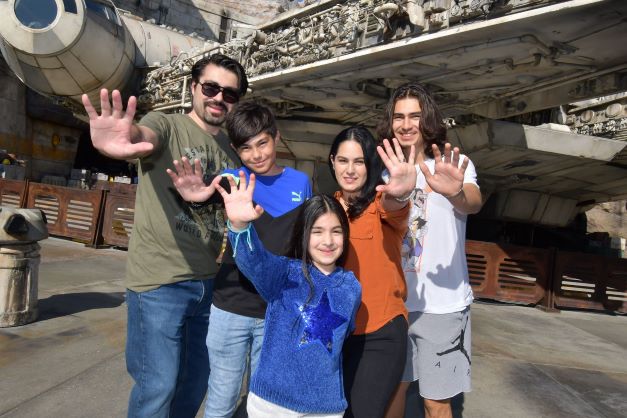 Sal with his family in Disneyland.

Do you have any hidden talents?

A fun fact that many people don’t know about me is that I was the Judo National Champion for Mexico in 2000. My dad inspired me to start judo in middle school, and I took to it instantly. I committed to my training, exercised a lot, and leveled up my expertise throughout high school. I competed in national and international competitions and won several times. One of the lessons I learned is that technique is superior to strength. I challenged a stronger competitor in one of my pivotal competitions and won by using his power against him — he pushed, I applied Morote-Seoi-nage and won the competition. Honing my martial art skills was a thrill, and I would like to get back into it again soon if time allows.