Making physical site models was the bane of my architecture school existence. The photocopying, the tracing, the hundreds of dollars spent on wasted reams of chipboard -- I can smell the spray mount just thinking about it. Ugh.

I recently came upon Slicer3, a Ruby plugin for SketchUp by TIG that's so useful and so easy to grasp that I couldn't wait to write about it. What it does is simple: Given a piece of geometry, Slicer3 slices it up. You tell it what spacing to use, how thick the slices should be and which direction to cut, and it does the rest. For turning a piece of digital terrain into a physical model, it's a godsend.

Take a look at what I was able to do with Slicer3:

Start with a terrain surface, then make it a solid (I use the Line tool) and group it.

Choosing X for "Slice Orientation" produces slices that are perpendicular to the X axis.

Specify your units in the Spacing and Thickness fields.

Entering the same value for Spacing and Thickness (and choosing Z for Slice Orientation) yields a traditional contour model.

Some things you should know about this awesome script:

And if that isn't enough, Slicer3 will also (if you wish) lay out each slice on the ground, separating them by an amount that you specify. It can even number the slices for you. Can you say "laser cutter"?

Tell Slicer3 to lay out copies of each slice on the ground -- and number them automatically.

One last thing: I thought it might be neat to try using Slicer3 on some 3D terrain from Google Earth. Here's my attempt: 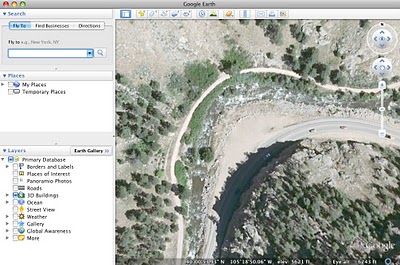 Start by framing a view in Google Earth. This is a section of Boulder Canyon, a few miles West of the SketchUp office. 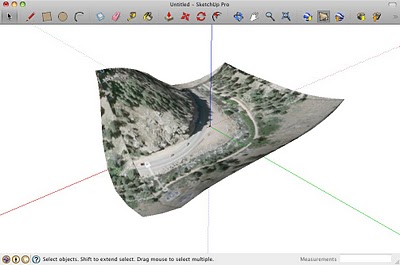 Import a terrain snapshot into SketchUp and color it (because it's prettier in color). 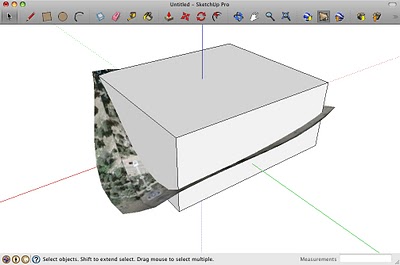 Make a giant 3D "crop box" that encloses the terrain you want to keep. 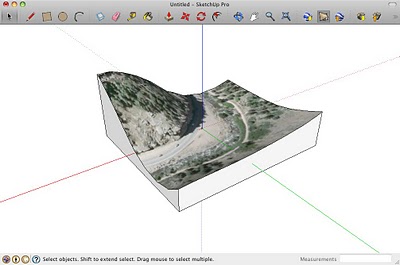 Use Intersect with Model to merge the box and terrain surface into a single, solid object. Then group it. 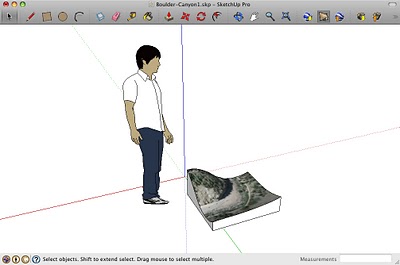 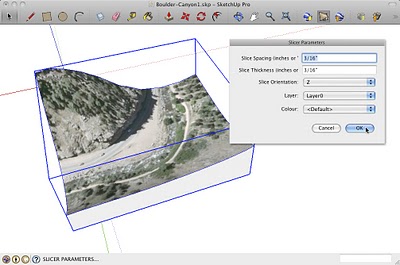 Use Slicer3 (this is the fun part). 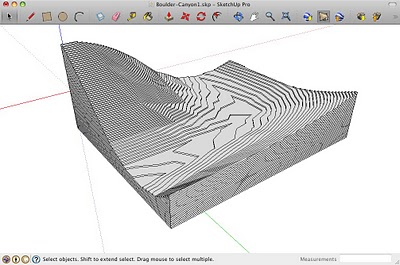 The resulting stack of slices. Cut, stack, glue and enjoy.

On behalf of the entire SketchUp community, thanks for this script, TIG. A thousand architecture students will get another hour of sleep because of you.