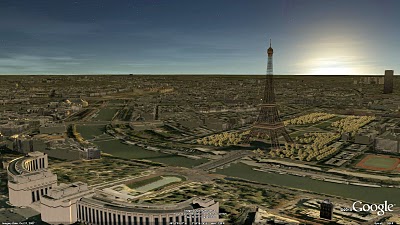 Often considered one of the top destinations for world travelers, Paris is known for landmarks like the Notre Dame Cathedral and the Arc de Triomphe, world-famous museums like the Louvre and the Musée d'Orsay, and hundreds of little bistros with French pastries so good they make your heart pop (literally and figuratively). Now all of these sites – and the many, many others that make Paris special – are available to tour in 3D in Google Earth.

With Google Earth’s “3D Buildings” layer turned on (or by using the Google Earth plug-in for Google Maps) you can wander the streets of the Montmartre district made famous by artists like Picasso, Van Gogh and Dalí from your living room. You can also see the Sacré-Cœur Basilica without having to climb the 237 steps to get there. Instead of waiting in line to see the view from the Eiffel tower, fly straight to the top in Google Earth and get a 360-degree view of Paris. Round out your tour by taking a peek at the Centre Pompidou, which turned the architectural world upside down (or perhaps inside out?) with its exposed skeleton and brightly colored building utilities.

Whether you’re an armchair tourist or planning your next vacation to France, take some time to tour the streets of the French capital and see the historic sites; after all, many of them were created by modelers just like you.

If you’d like to get involved in modeling your town (or any other location), we have several tools to get you started. With Google Building Maker, you can create and contribute a building in as little as 10 minutes. And if you’d like to refine your building, bring it into Google SketchUp for fine-tuning.